Posted on September 6, 2010 by Courtney Carter 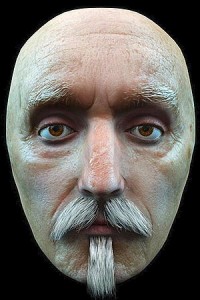 3-D is history. As in the History Channel.

When Entertainment Weekly said in its September 4th issue, “60 films over the next two years will be released in 3-D”, I’m sure they didn’t have an image of William Shakespeare resurrected in 3-D in mind.

As anyone who has been to the movies–or even seen a commercial can attest that 3-D is in fact, everywhere. Avatar, a movie in 3-D, is the highest grossing movie of all-time pulling in $749 million just in domestic sales. 3-D also came to television in 2010.

But, as the trend of 3-D film seems to be the wave of the future, it is now going backwards.

The New York Post wrote an article about a September 13th History Channel documentary that will feature a new 3-D image of William Shakespeare.

“Breakthroughs in computer imaging mean we may have to rewrite the history books on Shakespeare,” states the Post, because there has been some criticism that the image doesn’t look anything like the older (or non-3D) images of him.

A well-known older image of William Shakespeare. Courtesy of william-shakespeare.info

Apparently, the past and the future, will now be in 3-D. 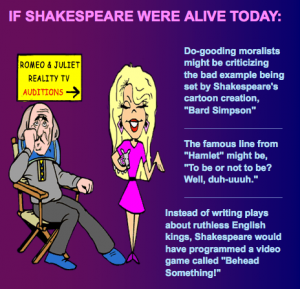 The cartoon above is something I put in for fun, if William Shakespeare were actually alive today, instead of just well, appearing in an image.

(Click on the image to make it larger if you need)

This entry was posted in Uncategorized and tagged 3-D, Arts. Bookmark the permalink.