Posted on March 3, 2011 by melissa.nicolardi 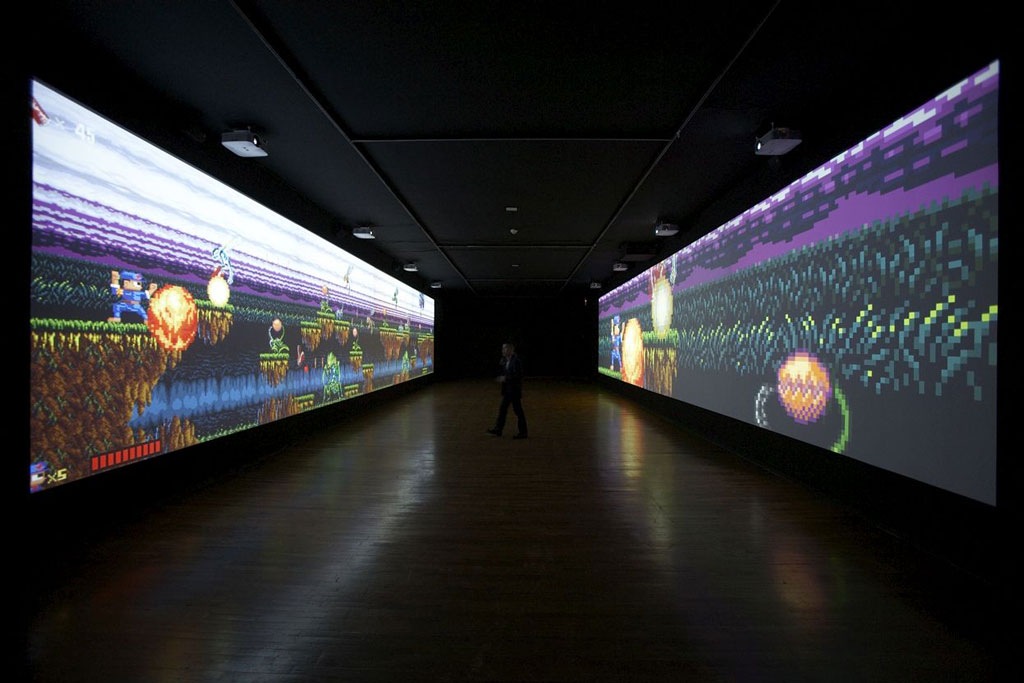 One hears the 8-bit sound effects of Feng Mengbo’s Long March: Restart well before entering the cavernous hall of MoMA-PS1 where the piece is currently on exhibit.

Completed in 2008 by the Beijing based artist and purchased by the MoMA in 2009, the large-scale electronic artwork is a fully functional video game incorporating symbols of Communist China with imagery appropriated from popular consumer games, including Super Mario Bros. and Street Fighter.

The title refers to the historic 6,000 mile trek endured by the Red Army under the command of Mao Zedong.

On a Sunday afternoon, I initially shared the space with just two other patrons who stood beside the larger-than-life projection mimicking the main character’s movements.

“The scale just makes you want to interact with it,” said Scott Jones, a graffiti artist who compared the hallway-long projection to an electronic mural.

The gallery docent explained how to use the wireless controller to make the hero – a Red Army soldier that bears a striking resemblance to the brothers Mario and Luigi – run, jump and hurl Coca-Cola cans at the villains in his path.  In one scene, a red Koopa, the iconic turtle villains of the Mario Bros.,  scuttles along a brick wall appropriated directly from original Nintendo game. Behind them, an 8-bit rendering of China’s Great Wall vanishes into the mountains.

I spent my three ‘lives’ almost instantly, too enthralled by the game-world to concentrate on playing.

The video game as art is not a new phenomenon.  Artists and filmmakers have used the medium for nearly as long as the game industry has existed, often using the language of gaming for social commentary.

While considered part of China’s Political Pop movement, Feng publicly emphasizes the “pop” over the “political” elements of his work.

The political commentary in Long March may be ambiguous, but judging from the line of visitors I saw waiting to “play” as I left the gallery, the work’s allure is clear.