The Start of a New Empire 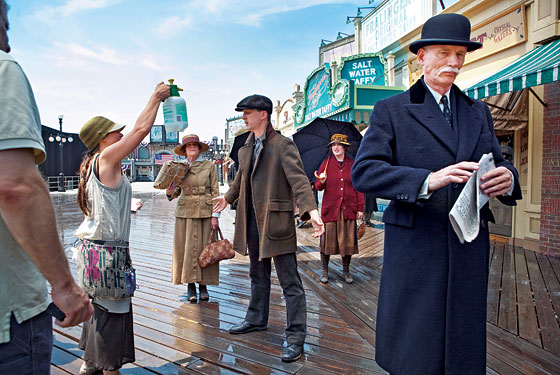 On the set of "Boardwalk Empire." Photo courtesy of New York Magazine

HBO’s newest show, “Boardwalk Empire,” debuts this Sunday and I must admit, I haven’t been this excited about a TV premiere since… well, let’s just say it’s been a while. With a saturation of shows about crime, single girls looking for love in the city, and C-list celebrities and their “reality,” there has been a definite downgrade of quality in the media.

There are three main reasons I’m eager to watch the show and why you should be too:

1. Martin Scorcese. Not only is he one of the show’s executive producers, but he also directed the first episode. While I’m not a hardcore film buff, I know enough about movies to know that Scorsese always delivers. Want proof? Just watch The Departed, then you’ll understand.

2. Most of the scenes were filmed in Brooklyn. Yep, that’s right, a show about Atlantic City (with some Chicago and Manhattan sprinkled in) and all the shots were actually in good old BK. In fact, the entire boardwalk set was created from scratch on the Greenpoint waterfront.

3. And last, but not least, one of the reasons I can’t wait to watch the show is simply because it looks so pretty. Maybe it’s because the ’20s held a certain air of sophistication, or maybe it’s the light filters used while filming. Whatever the case, “Boardwalk Empire” is aesthetically pleasing to the max.

So if you’re like me and have grown weary of tacky melodramas and reality TV shows, tune in to “Boardwalk Empire” this Sunday at 9 p.m. Here’s hoping I don’t spot any anachronisms.

1 Response to The Start of a New Empire