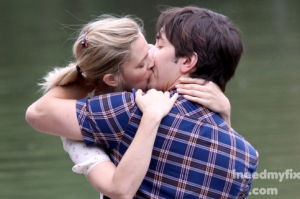 The most enjoyable part of Going the Distance, the new hipster rom-com with Drew Barrymore and Justin Long, perhaps sadly, is the opening credits. Set to zippy music, the motion graphic sequence features a collage of shots of road maps of the United States. A small, silhouette of an airplane traces its route back and forth from New York to LA across.

This stylized introduction to a film or television show is an alternative way to illustrate its central theme. In Thank You For Not Smoking, the opening sequence features a cartoon dancing cigarette box from the 1950s. In Juno, the title character, animated like a sketchily drawn comic book heroine, saunters through her hometown grasping a jug of Sunny D. And in Up in the Air, highly saturated photos of cities shot from an airplane divide up the screen in 1960s split-screen. A little eye-candy to draw in the audience.

With the advent of graphic design as a cultural phenomenon (ever asked someone in a Williamsburg café what they do for a living?), these sequences are becoming more popular. A website dedicated to graphic design in the movies declares “forget the film, watch the titles.” Motion graphic studios, like LA-based Shadowplay Studio, which produced the opening credits for all three films mentioned above, are opening up to feed the beast. And, as the New York Times noted, there is even an award for the best of the best!

This entry was posted in Uncategorized and tagged drew barrymore, going the distance, juno, justin long, opening credits, up in the air, watch the titles. Bookmark the permalink.