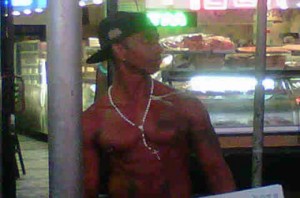 A teenager who is advertising a show in Times Square calls attention to his looks and the show he's trying to sell by wearing a rosary necklace on Sept. 25, 2010.

Jewelry accessories are often used to set the tone of an outfit, but recently the resurrection of one item from 1980s pop culture is doing more than accenting an ensemble. It’s functioning as a distraction altogether. Rosary necklaces made a comeback this summer, with teen sensations Miley Cyrus and Taylor Momsen, among other trend-setting stars, donning sometimes four of these religious accessories per outfit.

Madonna started it all 20 years ago when she made religious and social statements through her songs and performances, but what’s this fad turned into nowadays? It’s not just girls appropriating religious iconography for self-expression, guys are doing it too. Apparently, the Y-shaped strands accentuate women’s bustlines and men’s chests.

L.A. Galaxy soccer player David Beckham sported a Dolce & Gabbana rosary necklace on the cover of Vanity Fair in 2004, spreading this look to men’s wear. Today, in cities across the country you’ll find young men of all backgrounds wearing the prayer beads. While expressing oneself through jewelry is only natural, what’s so distracting about wearing rosary beads is the irony of it.

“Jewelry is about materialism, and the spiritual message is the opposite,” professor Steve Prothero of Boston University told the Los Angeles Times in an article on rosary necklaces. Wearing a rosary as a necklace is sacrilegious, according to the Roman Catholic Church, but that’s not stopping jewelry makers from tapping into the trend.

About four years ago, Brooklyn-based designer Jessica Elliott created a line of rosary necklaces called Twisted Faith, which don’t have a cross dangling at the bottom but include other spiritual symbols.

“The ‘rosary’ name of the necklace stems solely from the shape of it – the aesthetic,” said Elliott. “They are not religious at all.”

After Jessica Alba wore one of Elliott’s rosary necklaces for a photo shoot, sales shot up for the entrepreneur.

“I don’t do anything with religious symbols. I feel like it alienates different customers. I try and stay with symbolic and personal and spiritual tokens/pendants/charms. The rosaries follow this philosophy as well,” said Elliott.

Although it’s not just Catholic symbols that are being appropriated for fashion (the Kardashian sisters launched a line of products with Armenian religious icons and the spurt of “Eat, Pray, Love” consumerism has made Hindhu symbols popular), the rosary trend is more disconcerting because it’s ubiquitous. JCPenney, zappos, and this hip-hop wear site are just of a few of the places that sell the hot items.

“I’m torn,” said Prothero. “Sometimes I do get annoyed when venerable religious symbols get dumbed down, but when has it never been like that?”

On face value the rosary trend may seem that America is edging toward embracing spirituality, but when it is a trend that’s being set by pop stars, it’s more likely that the opposite is happening.