“Next Great Artist” at the Brooklyn Museum

From “Project Runway” to “Top Chef” to “Shear Genius”, Bravo TV is no stranger when it comes to reality show competitions. Unfortunately, between flashy editing and interpersonal drama of cast members, the actual talent of these individuals takes a backseat to the drama that is played up during the show. Knowing that, when Bravo premiered their latest reality competition, “Work Of Art,” to find the “next great artist” this past June, I rolled my eyes and flipped the channel. How could art be reduced to a jaded reality show? I couldn’t help but wonder how skilled these artists actually were. For all I knew, the contestants could’ve just been seeking their own 15 minutes of fame. 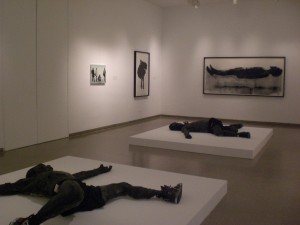 Fast forward five months later. Abdi Farah, the winner of “Work of Art,” debuted his exhibit to the public at the Brooklyn Museum. While I had never watched more than ten minutes of the show, I was curious to see whether Farah’s win was legitimate.

The exhibit, entitled “Luminous Bodies,” opened August 14 and will be on display until October 17. Upon entering, visitors are immediately confronted with two slightly-larger-than-life-size sculptures of men laying on their back, dressed in basketball shorts and Nike tennis shoes. “Libation,” as they’re titled, are made of resin, spray paint and mixed media. I was immediately reminded of “The Awakening” statue at the National Harbor in Maryland, as both installations depict gnarled, contorted facial expressions. 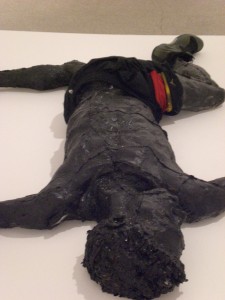 "Libation" explores the notion of the body as a material object.

While the contours of the sculptures are impressively detailed, my favorite piece was “Grey (Farewell Line),” an oil painting of the backside of four people dressed in street clothes. The stark gray background is an ideal backdrop for the figures, enhancing the shadows in the their clothing.

I admit, I was surprisingly impressed with the quality of Farah’s work. While at the exhibit I also learned that in the past, contests were held to discover talented unknown artists; Apparently “Work of Art” was inspired by a history of juried-exhibition tradition. According to the Brooklyn Museum, the Louvre held competitions in nineteenth-century France for artists to enter their work. 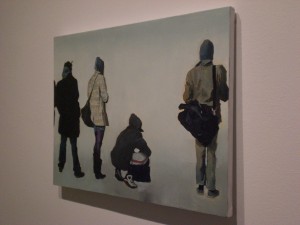 "Grey (Farewell Line)" captures the relaxed and organic poses of the figures from behind.

Perhaps Farah’s talent will last longer than 15 minutes. After all, there have been reality competition winners that have maintained their success. Take for example, “Project Runway” season 4 winner Christian Siriano. Four years after winning, Sirano is still going strong, with shows at New York Fashion Week, a shoe line, a makeup line, and most recently, a book deal.

Here’s hoping Farah’s career as an artist is just as “fierce!”

2 Responses to “Next Great Artist” at the Brooklyn Museum