The Columbia-area pizza scene has long been a two-front war between the oversized doughy convections of Koronet and the old tyme Italian options of V & T. Tasty, but ultimately plain options.

Enter Bettolona. Beneath Broadway’s elevated 1-line, Bettolona’s brick oven fires out thin pies with a quality unsurpassed in a 20-block radius. Opened two weeks ago on the block between LaSalle Street and Tiemann Place by the guys behind Bettola (40 blocks South), the restaurant is a reasonable facsimile of its parent.

For starters, there’s the brick oven, whose fire you can watch from anywhere in the restaurant. 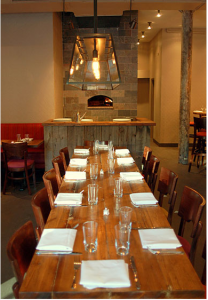 The brick oven is Bettolona's centerpiece. (Image by Bettolona, via Grubstreet)

Then there’s the soft yellow lighting, brick walls and requisite open air seating (on warm days).  The menus are similar — a collection of classic Italian antipasti and entrees, and personal pies — but Bettolona manages to serve that food for much cheaper than its Southern relative. The price of a Bettola pie ranges from $12.50-$15, while Bettolona’s top out at $12.50.

I tried the margherita and bianca (white with mushrooms) pies. The bianca was one of the best white pizzas I’ve had in a long time. The mushrooms were thick and cooked just enough to avoid that gooey stir-fried texture that can mar a good pie.