Time flies when you’re watching “Time Stands Still.” It’s one of the only 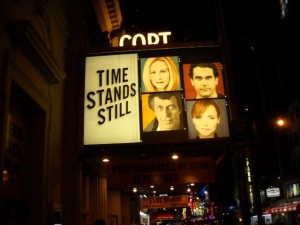 plays I’ve seen recently where I didn’t catch myself checking the time. Back on Broadway at the Cort Theatre as of Oct. 7 after a winter/spring run and summer hiatus, the play by Donald Margulies leaves you bubbling with emotions from witnessing a relationship unravel on stage.

This timely, poignant production also leaves you with the gnawing question of whether war correspondents are helping or exploiting the misery of others in Iraq and Afghanistan. Lastly, you come out wanting to give actress Laura Linney’s character a chill pill.

The play’s intensity is driven by Linney’s stellar performance of Sarah. Injured from a stint covering the war in Iraq as a photojournalist, Sarah is reluctantly settling back into life in Brooklyn. She’s acerbic and practically bites off her long-time boyfriend’s hand any time he tries to help her move around with her crutches.

Sarah’s quick-witted sarcasm is at it’s best when juxtaposed with Christina Ricci’s character, Mandy. The new girlfriend of Sarah’s magazine editor, Richard, played by Eric Bogosian, Mandy is bright-eyed and Pollyanna-esque.  She knows she’s out of her league among these intellectuals, but she never shies away from speaking her mind – even if it comes out naïve and daffy. Ricci’s barely 5-foot stature makes the adolescent-like lines Mandy belts out more believable. At first she seems like a teenager on stage, but she delivers much more. As the play continues, Mandy asserts her place in Richard’s life and grows on Sarah.

Ricci, too, gets a better foothold on the stage as her character develops.  Instead of laughing at her ditsy remarks, by the end, you’re agreeing with her and disdaining Sarah’s holier-than-thou, self-righteous attitude about life. While it’s Ricci’s first time on Broadway, the 30-year-old actress comes out with a confident performance. She admitted to The Associated Press that she had to get past an incredible amount of stage fright to do the role, but it’s not at all apparent in her performance.

“You can read her eyes from the back row of the balcony,” the show’s Tony-award-winning director Daniel Sullivan told the AP. “She has those giant eyes that are extremely expressive. Her face picks up stage light beautifully. She just sort of glows up there.”

In the spring, actress Alicia Silverstone played the role, but Ricci seems to be filling it just fine now.  It was rumored that Ricci was brought in because her name would attract a bigger crowd that Silverstone did, however, that doesn’t seem to be the case. The show’s only been back two weeks, and there were plenty of empty seats. People don’t know what they’re missing!

When you leave the show, it’s hard to believe that just four actors carried such an emotion-inducing production.