Joe Preston and the Temple of Doom 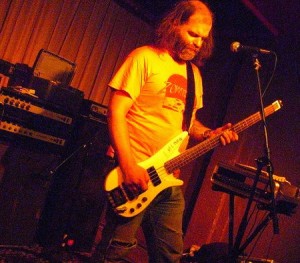 Sure, he hasn’t cut his hair in so long he looks like Gallagher at OzzFest, and his rainbow guitar strap holding up his reverse-head-stocked Washburn isn’t helping the case much either. But Joe Preston, the one-man mastermind behind the avant-metal project known as Thrones, unleashed a a tsunami of dark and melodic metal last Wednesday in Bushwick.

Preston’s pedigree stuns in its facets. Adam Rathe, arts editor at New York Press, told me he’s “a living legend.” His contributions to the contemporary metal canon include Earth, The Melvins, Sunn0))), and High on Fire. Thrones, Prestons’ solo work since early 1996, synthesizes the elements of those other bands while allowing him to go for his own take on song construction and detail. It sounds like you might expect: slow, loud, dark, heavy. But Preston also seems to know something the progenitors of his other bands didn’t. He adds ambient elements, modulated voice tracks, and electronic drums (likely out of necessity).

Last Wednesday, Preston played an hour-long headliner at Bushwick’s tiny railroad venue, The Acheron. With a bar hidden behind an “EMPLOYEES ONLY” sign and the speakers chained to the ceiling, the venue is one of the city’s treasures, taking on booking from Todd P. and Death by Audio as regularly as BrooklynVegan. Preston had a crowd of about 50 in absolute rapt attention. Moving from huge, surging pulses, to ambient washes, to angular Doom that somehow stayed intriguing, Preston hypnotized with his set. He was awkward between songs, thanking the crowd like a pigeon-toed toddler, and confident during his performance, like a monk of the macabre, solemn and forceful.

Afterward, as Preston dismantled his wall of amps, his cadre of pedals and his other electronics, the breadth of his legacy contradicted his stellar memory: “Your band opened for me and Deerhoof in Boston almost ten years ago,” he said to someone examining Preston’s setup. “You guys really ripped.” Christian Mistress and Villains opened the show.

And although Preston has not made much in the way of Thrones recordings recently, he’s got a new LP coming out from when he served time in Seattle’s most formidable champions of the Doom scene: Earth. The record will be out via Southern Lord quite soon. From the label:

A Bureaucratic Desire for Extra Capsular Extraction contains the entire 1990 Smegma Studios sessions which are the debut recordings from Earth. Previously available scattered via the Extra Capsular Extraction EP and Sunn Amps and Smashed Guitars CD, …[this] collection contains every note from the infamous first Earth recording sessions. Earth was founded by Dylan Carlson circa 1989 and in this infancy stage contained several different members including: Slim Moon (Kill Rock Stars label), Joe Preston and even Dylan’s close friend Kurt Kobain.