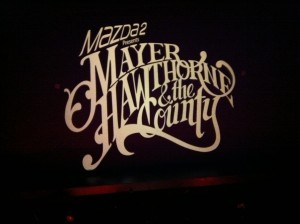 The over-obvious pandering to the sponsor left some Mayer Hawthorne & the County concert goers with a dirty sell-out feeling last Monday night.

The soul-rock group had two objectives at the Music Hall of Williamsburg: to rock the house and shill for Mazda. The night’s most awkward moment in an otherwise enjoyable show was when Detroit-bred frontman Hawthorne gave a shout out to the carmaker. Until that moment, the audience had cheered enthusiastically to Hawthorne’s anecdotes and jokes, but his quick Mazda plug was greeted with silence. He gracefully pretended not to notice.

Sponsorship is a necessary evil–touring costs money–but it’s a shame the bandleader must subject himself night after night to the on-stage advertisement–doesn’t Mazda know this is sell-out self-flagellation? Wasn’t it enough that that the sponsor’s logo was plastered on signage throughout the Music Hall, projected above the stage, and a Mazda with the band’s name on it was parked in front of the venue?

“I liked when he said that this was for Mazda,” Nick Elias, 30, an architect visiting from London joked. “Sponsorship is a really crucial part of music.”

Despite the pandering, the show was engaging musically and visually. The pleasing mix of pop and soul had catchy vocals that recalled tunes from the 1970s. Hawthorne also played a fun cover of Pharell’s Beautiful in an otherwise all-original set.

The look of the band, whose sound is polished yet unapologetically derivative, gave a nod to the long history of rock from which they borrow–they could have been playing a high school sock-hop. They wore a uniform of fire engine red cardigans, with shirt and ties and Hawthorne donned Buddy Holly glasses and a three piece suit. The band succeeded in conjuring an ambience thick with rock’n’roll.

So Mazda, take heed: sponsor the arts all you want. But don’t make musicians do live commercials–it kills the mood.