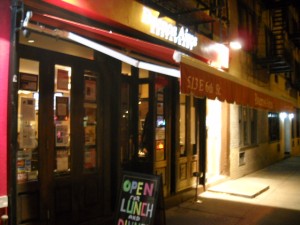 America thrown into nouveau dishes) makes it a breath of fresh air when you walk into a restaurant in which the owner has stayed true to his or her roots. While Latin fusion was No. 2 on a list of 20 restaurant industry trends for 2010 by City Pages magazine, Buenos Aires restaurant in the Lower East Side is sticking to its guns.

Opened in March 2006, the establishment feels as if someone encapsulated the famed locale El Palacio de la Papa Frita in Buenos Aires and plopped it down on East 6th Street in New York. When I went to Buenos Aires Restaurant, its atmosphere evoked many of my childhood memories eating at confiterías and in my grandparents’ kitchen.

To start off, the menu is precisely what you’d have if you went to an Argentinean home for dinner. It was nice to see melon with serrano ham and assorted empanadas, which are often made for special family functions, and the Picada Buenos Aires on the list. Picadas include a selection of hams, cheeses, and cold antipasti. Just this item on the menu brought back memories of when my Italian-Argentinean grandfather would prepare a picada for us before dinner – the salami was the best!

Heinz Ketchup bottles that accompany side orders of fries are the only giveaway that you are in New York City and not South America. Chimichurri sauce, which is made with chopped parsley, garlic, olive oil, and crushed red peppers, among other ingredients, also comes with entrees. Indulge in this Argentinean tradition by drizzling it over your steak and dipping your fries into it. You’ll be burping up garlic for sometime after you eat it, so I wouldn’t recommend  going to town with it while on a date.

The rest of the menu – made up of mostly meats, pastas, and anchored by the signature entree, a parrillada – is also quintessentially Argentinean. Buenos Aires Restaurant is a carnivore’s heaven, so vegetarians might want to consider that they’ll have few options to choose from before heading over. Entrees range in price from about $15.95 to $38.95. When it comes to steak in New York City, Buenos Aires Restaurant gives you a lot of bang for your buck. I’d even recommend sharing a steak dish – portion sizes are more than enough for one person. While the menu is moderately priced, the wine list is not. Few wines are served by the glass, and the Sangria, priced at $10 a glass, is the best offer on the table.

The smell of sizzling steaks and chorizos fills the room in this tiny establishment. While the rich and heavy menu is better suited for cold weather dining, the restaurant itself, which has considerable outdoor seating in a backyard patio, is better made for summery weather. If owner Karina de Marco put up heat lamps and space heaters and lit up the area with candles, the place would be perfect for October weather. Another area in which de Marco went wrong is in plastering the restaurant’s windows with reviews. While we all want to know what the experts think, the clippings are tacky and detract from the restaurant’s cozy ambiance and homey decor.

Scott Gursky, 33, a Brooklynite who went to Argentina on his honeymoon, ate at Buenos Aires Restaurant recently to celebrate his three-year wedding anniversary with his wife. It’s become a tradition for the couple, as they come back each year for some authentic Argentinean steak.

He’s tried other places in town but he says, “We just like this one. It’s pretty authentic.”

It’s also a great place for a casual birthday or dinner with close friends. Buenos Aires Restaurant is a no-frills kind of place that serves up the best of Argentinean cuisine.