Scantily clad ladies! Trapeze artists! And bucket-loads of corn syrup! Lady Rizo and the Assettes delivered a stellar performance filled with fun and frivolity at the Hallowed Eve show at the Highline Ballroom on Saturday night.

The caburlesque troupe (caberet and burlesque combined), led by the divine Grammy-winning Lady Rizo, a k a Amelia Zirin-Brown, presented the best musical numbers, original bawdy sketches and, of course, strip-tease that New York City’s burlesque scene has to offer.

One highlight was Lady Rizo’s homage to a fellow Grammy winner’s cultural gem, “Blame It (On the Alcohol).” For the number, the blonde comedienne sat at the edge of the stage before the packed house in a rippling pink Marchesa dress and sang Jamie Foxx’s mega-hit in an operatic fashion. Slowing down the lyrics, which are normally spat rapidly, allowed this writer to hear the words for the first time.

“She spilled some drank on me,” Lady Rizo trilled. “And now I’m knowing she’s tipsy… No telling what I’m gonna do,” after which Lady Rizo inserted, “Date rape?”

Other great numbers were performed by individual Assettes, like the Baronass Von Harmer and Trutha Darrah. 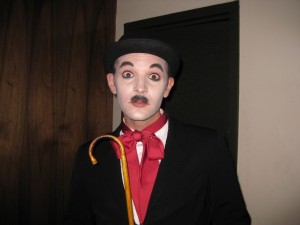 The dinner theater’s tables were packed by adoring fans and burlesque newbies alike—many of whom came dressed in Halloween costumes. One member of the audience, a lawyer who preferred not to be identified by name but by her authentic Oktoberfest beer maid dirndl, said she liked this performance better than burlesque shows she had seen at Joe’s Pub and the Slipper Room because Lady Rizo and the Assettes’ bawdy humor was campy—less explicit and graphic than other popular performers on the scene, like Darlinda Just Darlinda.

For the night’s finale, the Assettes, dressed only in white undershirts and fishnet stockings, emerged onstage with Jack-o-Lantern buckets of “blood.” After threatening those seated in the front row with a dousing, the performers poured the crimson liquid on themselves and then flopped around like zombies on the slippery stage. The audience ate it up.