Cricket (the Sport) Alive in the Big City 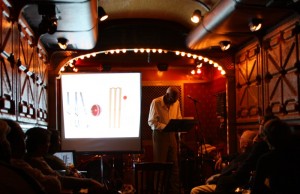 I don’t like sports, or hipsters, or bars so it was strange to find myself tonight in a bar listening to a lecture about sports with a bunch of hipsters. But the sport was cricket, so I thought that it would be a posh way to spend an evening, since the vast majority of folks who play it have an accent.

“Cricket in Times Square” was a lecture put on at Pete’s Candy Store – a hipster bar – by Clarence Modeste, president of the Staten Island Cricket Club. Mr. Modeste has been playing the sport since he was 5 or 6 years old, he says, and chose it on his native Tobago for practical purposes.

“I was far too skinny for rugby,” he says, “and I still remain so.”

His task – to explain a sport to me – was not insignificant. One might even call it daunting.

“Cricket is the world’s largest bat and ball game, by quite some measure,” he began. I also learned several other facts, including the Old English for cricket: cricee or crycee. And that cricket in its current incarnation is a descendant of stool ball and trap ball.

Stumps are wickets and LBW is short for “leg before wicket.”

I listened patiently with the 25 or so other people gathered in the back of the bar, waiting for that “ah ha!” moment, when wickets and stumps and bats would all make sense. Alas, it never happened. Then I daydreamed about sticky wickets and wondered if this phrase had its roots in the sport (it does). 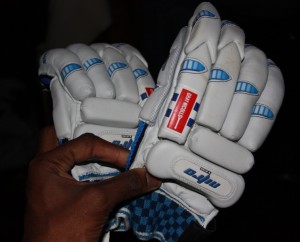 I thought about typical American sports and really wished that cricket interested me, since it seemed so erudite and intellectual. Like it might make up for being called last for teams in middle school.

Mr. Modeste passed some of his gear around, which was interesting. It was wonderful seeing someone so passionate about a sport that seemed to represent so much of their childhood. He recounted playing the sport in the warm ocean breeze on Tobago as a school child. He talked about a book on cricket written by a woman named Beth Hines, and an exhibit on the sport that was set to travel to Cooperstown (due to its similarities to baseball).

In the end, though, I found that cricket was not for me. But I found myself grateful for the experience and for a delightful man who undertook an insurmountable task: getting me in a bar with a bunch of hipsters to learn about a sport.