‘The Last Newspaper’ Misses the Mark

Posted on November 3, 2010 by Jessica Dailey

As a journalist, the first thing I thought when I learned that the New Museum was mounting an exhibition about the news was, “Cool, an art exhibit about what I do.” Despite the ominous title of “The Last Newspaper,” I was excited to finally be able to go see the exhibit this past weekend.

But it really wasn’t about the news. Instead, it was about how artists use the news to create art, which is nothing new. Artists have used newspapers and journalistic means in their artwork for decades, even centuries if you consider when collage making originated.

One of the oldest pieces, and most successful was a collage made by Judith Bernstein in 1967. She combines a piece of an American flag with news clippings from the civil rights movement, then writes political comments and angry sentiments on them in charcoal to create a powerful message. Holland Cotter of the New York Times called it “a time-capsule version of a splenetic blog rant.” 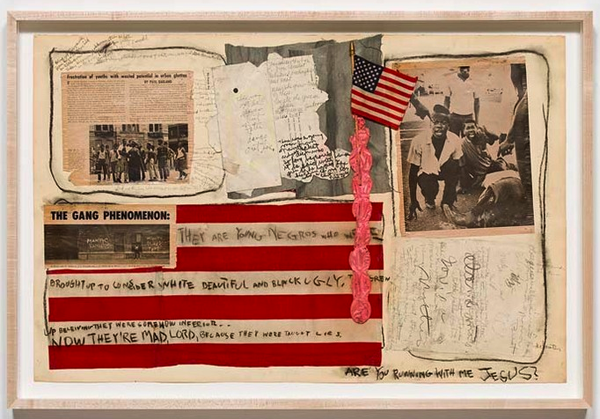 Judith Bernstein, Are You Running With Me Jesus?, 1967

Another powerful piece is by Andrea Bowers. In a series of text based drawings titled “Eulogies to One and Another,” Bowers reproduced eulogies of Marla Ruzicka, the founder of Campaign for Innocent Victims in Conflict, who died in Afghanistan with her co-worker Faiz Ali Salim. Bowers shows us the eulogies in their entirety, then edits them to show only the one or two sentences where Salim is mentioned. The result is a clear message of who the media privileges.

But most of the pieces seemed random and meaningless. Thomas Hirschhorn dressed mannequins in prom gowns cover with news photographs, with each figure donning images of a single subject: stock-exchange workers, dead soldiers, rich foods, and advertisement phrases. Whatever meaning they had got lost in the messy and childlike construction. On another floor, two video screens showed weather reports and forecasts from other cities, which, like the editor of the New York Observer, Kyle Pope, said, “succeeded in telling me nothing.”

The exhibit also includes several organizations who are using the museum space as an office throughout its run. The presence of a few of the groups, like Latitudes which creates a weekly paper about the exhibition, enhance the show, but others, like the Center for Urban Pedagogy, seem out of place.

In comparing the show to a small town newspaper, Pope described the problems of the exhibition best: “The exhibit suffers from a randomness that reminded me of a bad small-town daily, a mixing of spaghetti dinners and Eagle Scout announcements I do my best to avoid.”