Media Bias at the New Museum’s “The Last Newspaper” 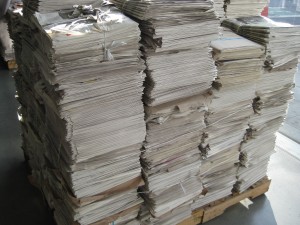 Stacked newspapers at the New Museum's "The Last Newspaper"

Andrea Bowers’ artwork “Eulogies to One and Another” (2006) at the New Museum’s exhibition, The Last Newspaper is the best piece in the show. Bowers’ drawings emphasize the uneven reporting regarding the deaths of an American and an Iraqi killed in the same suicide bombing in 2005.

Marla Ruzicka, the American founder of the Campaign for Innocent Victims in Conflict, and Faiz Ali Salim, the organization’s Iraqi country director, worked to raise money for the families of civilians killed in Iraq. After Ruzicka and Salim were killed, publications reported their deaths in starkly different ways. As opposed to the long obituaries for Ruzicka that ran in Time, The Independent, MSNBC, Christian Science Monitor, and the Washington Post, Salim’s death was reported in short one-liners in the same articles. 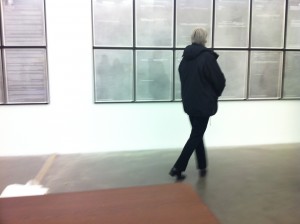 Visitors inspected Bowers' "Eulogies to One and Another"

Bowers’ drawings are enlarged reproductions of the articles. Mounted side-by-side, the unbalanced coverage becomes obvious. To the left, stories with hundreds of words and large photographs memorialized Ruzicka. To the right, the prominent mastheads sit above pulled-out, one-line references to Salim’s death, surrounded by empty space.

The sad irony, of course, is that the purpose of the non-profit for which both Ruzicka and Salim worked was to care for the families of non-combatants killed in the Iraq War. The media’s treatment of their deaths reinforces why organizations like theirs must exist—so Iraqis aren’t forgotten.

The artwork left Jay Cohen, 23, who visited the museum on Sunday, angry with journalists. “The audacity of the press gap between what an American death saw and an Iraqi death saw really showed me the extent of what bias means in media,” he said.

Did bias in the media spawn this ethnocentric coverage? Or do journalists pander to readers’ bias in order to sell newspapers? Probably both. Either way, Bowers’ work points out yet another example of how our tribal tendency to be concerned with our own affects what gets reported. 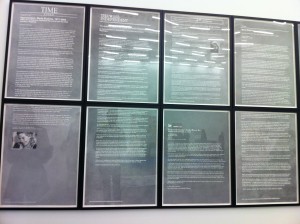 The articles that memorialized Ruzicka often included only a short sentence about her Iraqi guide, who died in the same bombing.

The stories on Ruzicka depict a passionate, courageous young woman trying to change American policies on reporting civilian deaths in Iraq. I can only imagine the stories that would have emerged if any of these prominent publications had pursued sharing Salim’s story. The blank spaces in Bowers’ piece reminds us of the words that could have honored Salim’s life, and by extension, the lives of the tribe outsiders that the media overlooks.