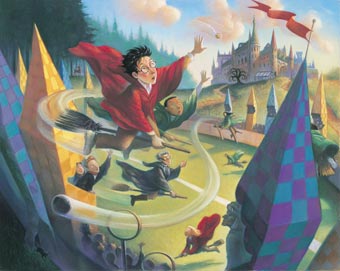 Quidditch is a magical sport derived from the Harry Potter series. Image obtained from Google.

Muggles, rejoice! The sport once reserved only for witches and wizards is now being played in the non-magical world — our world. This weekend is the fourth annual Quidditch World Cup, and this year it’s being held in our own back yards . . . well, New York City, at least. From Nov. 13 — Nov. 14, 46 teams from across the country will gather at DeWitt Clinton Park and compete for the title of Quidditch Champion.

For all you muggles (non-magical people) who are out of the loop, Quidditch is a game that was first introduced in the book Harry Potter and the Sorcerer’s Stone. In the magical version, each team is comprised of seven players, who fly around on broomsticks and try to score points by throwing balls (Quaffles) through large, elevated hoops, worth 10 points each. To keep the opposing team from scoring, heavy balls called Bludgers are thrown at players to slow them down. The main goal of the game, however, is to catch the Snitch — a small golden ball with wings that rapidly flies around to keep from being caught — a job that is reserved only for the Seeker. Each team has one Seeker, and whoever catches the Snitch first scores 150 points for their team, a score so high that it usually wins the game. You can learn more about Quidditch — in detail — in Quidditch Through the Ages, a supplemental book penned by J.K. Rowling under the pseudonym Kennilworthy Whisp.

“Muggle Quidditch,” as it’s been dubbed, was created in 2005, and started off as an intramural league at Middlebury College in Vermont. Since then it has gained the attention of sports enthusiasts and Harry Potter fans alike, with more than 400 colleges and 300 high schools in the U.S. participating. Since Muggle teams have no magic, the game is altered to compensate for non-magical components; instead of flying around on brooms, teams must carry a broom between their legs at all times during the game. Also, instead of a winged ball, a person dressed in all yellow (or gold) runs around as the Snitch. It’s still tricky, though, as the Snitch is usually a cross country runner who hides and runs around within set boundaries, evading the Seekers.

From the day the first book hit shelves 12 years ago, the Harry Potter series has become one of the most famous and well-known series on the market to date. So far six of the seven books have already been adapted for film and the seventh movie, Harry Potter and the Deathly Hallows (part one of two) premieres in the U.S. this Friday. The creation of Muggle Quidditch is yet another part of the Harry Potter brand, which is currently worth approximately $15 billion. Harry Potter fans are devoted, to say the least, with imaginations that long to be in the Hogwarts world. Lucky for them, there is endless paraphernalia that caters to wizard wanna-bes, from broomsticks and wands, to Hogwarts uniforms and accessories.

For all your Harry Potter lovers out there, check out the International Quidditch site for more info about this weekend’s tournament, as well as upcoming regular season games. And for those who aren’t as enthusiastic . . . I suggest buying Harry Potter stock, since this is a trend that won’t be going anywhere for a long, long time.