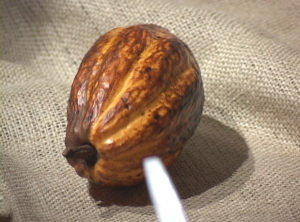 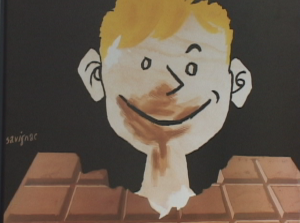 The United States chocolate market is an $89 billion industry, but at the 13th annual New York Chocolate Show, there wasn’t an M&M or Hershey bar in sight. The four-day event at the Metropolitan Pavilion in Chelsea brought together over 50 specialty chocolate-makers from as far away as Tokyo and a close as Long Island City. The program included demonstrations by chefs from Restaurant Jean-Georges and Double Crown, a fashion show with chocolate outfits and enough candy samples to fill even the most chocoholic belly.

Colette Nguyen came from Washington, D.C. for the Chocolate Show. Her three best friends from Kindergarten live across the country, but they always make sure their annual reunion in New York coincides with the Chocolate Show. “Chocolate is a special food,” she said. “When you want to express love, express caring, you give somebody chocolate.”

Tucked away toward the back of the exhibit hall, Swedish chocolatier Hakan Martensson of Fika Choklad carved elaborate sculptures of angels and clowns out of his chocolate. “It’s up to your own imagination how you want to create and develop your stuff,” he said. “You can’t be in this business without a passion for chocolate.”

Jerry Swain of Jer’s Chocolate in Solana Beach, CA knows all about loving the sweet life. A former IBM salesman, Jer used to make chocolate-covered peanut butter balls for his family and friends at Christmas. Now he does it as a full-time job. “I decided to throw high-tech to the side and kinda follow a dream,” he said at his booth at the Chocolate Show.

Toward the front of the exhibit hall were several booths from fair trade chocolate companies, including Divine Chocolate, whose cocoa beans are imported from Ghana. Most cocoa beans are farmed in West Africa, Central and South America and Asia, but consumed in Europe and the United States. Divine chocolate is a pioneer in the chocolate industry because farmers themselves, who are part of a cooperative called Kuapa Kokoo, own 45% of the company.