The Internet: A Free-Range of Everything at the New Museum 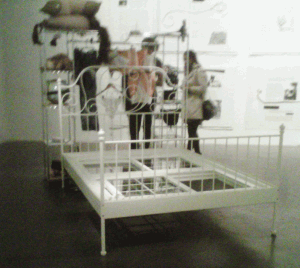 "Pangea" at the New Museum

because classmates broadcast a sexual encounter Clementi had with a man on the Internet; and now a New Jersey pastor is telling staffers they need to deactivate their facebook accounts because it’s a gateway to adultery. The Internet has clearly invaded our privacy and entered the bedroom.

This is the same message artist Lizzie Fitch conveys with her work of art titled “Pangea” on display in the “Free” exhibition at the New Museum. “Pangea” is composed of a bed frame with windows as the mattress. The artist is metaphorically saying that the Internet has enabled transparency in all facets of our lives – including our intimate relationships.

Fitch fittingly chose a metal frame with bars, instead of a solid, opaque headboard, because it furthers the theme. Underwear and other intimate garments also hang on a rack, which is also translucent.

Overall, “Free” highlights how the Web has changed modern life. From official documents to pornography to promotional material, the Web is an ocean of information, according to the “Free.”

“It represents everything very well,” said Javier Moreno, 28, a visitor from Madrid. “At the same time we have less privacy.”

The Spaniard noted that while it’s easier to promote your work and your art through the Internet, other aspects of your life are also unveiled.

“Today, you can expose anything you do,” he said in Spanish, pointing to the windows on the bed as an example.

1 Response to The Internet: A Free-Range of Everything at the New Museum