Information Wants to be “Free”

It’s the hive mind. It’s the ever-remoteness of reality through media, the lens of journalistic record revealed, the curtain of information gathering thrown back. These, notions of information ownership, access and craft were themes tackled by participating artists in the New Museum’s current show Free, running until January 9. 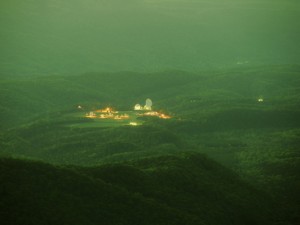 An image from Trevor Paglen's "They Watch The Moon". Image courtesy free access.

Of particular interest are exhibits by Trevor Paglen and Lisa Openheim. Both dealt with access to information, through photographs, although in vastly different ways. Paglen’s “They Watch The Moon” examined artifcats of human existence that escape the normal purview of human existence, even in the modern world. Paglen juxtaposes the natural expanse of the world with unnatural barnacles of scientific progress (satellites, secret military bases, etc.). The result is astonishingly revealing and somewhat alienating. How oft should we contemplate that which is hidden from view, and through which channels does information flow that we don’t even know about? These are questions I asked myself upon viewing this work. 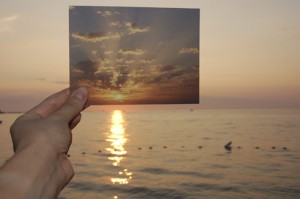 Oppenheim’s work straddled notions of ownership and reinterpretation through a tribute of sorts. The photographer, who presented projections of her slides, borrowed photos of sunsets from public photo pools on Flickr that US soldiers took abroad. Then she photographed them in in the framework of her own existence, revealing the process and context of her method. By so specifically choosing a medium of public domain, this piece had me thinking about how far removed we are from the information presented to us on television and the web. Through how many different filters and by how many different eyes did these photos pass before entering my own retinas? Yes, these are just sunsets, but the plaintive beauty, coupled with Oppenheim’s concept, allows the viewer to ruminate on the far flung corners of reality.

1 Response to Information Wants to be “Free”