The Old New York Through the Lens of Stieglitz

The Metropolitan Museum of Art is highlighting one of the founders 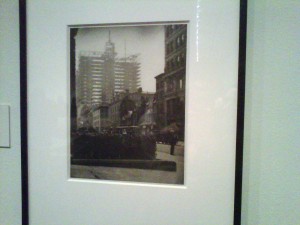 of its photography collection, Alfred Stieglitz, with an exhibit this month. “Stiegliz, Steichen, Strand,” which opened Nov. 10, offers a glimpse into the old New York – the world Stieglitz inhabited when he had his famous Gallery 291.

Images of his wife, renowned artist Georgia O’Keeffe, line the exhibit space, which was well-attended on a chilly autumn afternoon. Smoke stacks, throngs of immigrants pouring into streets, old cars, and machinery bring the spectator to Manhattan’s past life.

Nancy, a Manhattan resident who would not divulge her last name, was particularly drawn to the photographs of old cars and planes because she’s interested in technology in general.

She said it gives her, “a sense of being there back in time with them.”

About 115 groundbreaking works are on display until April 10, 2011, ranging from portraits, to city views, to cloud studies by Stieglitz. An influential advocate for modern art, Stieglitz brought New York art to the future with his contributions, and now his work is taking New Yorkers and visitors back in time.

A constant, however, then and now is that it is still “The City of Ambition,” just as Stieglitz depicts in a photograph.