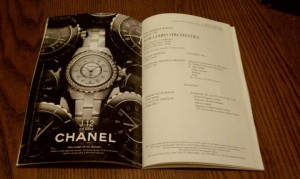 Even in a city as expensive as New York there are quintessential bargains to be found. One of the ones that I’ve enjoyed over the years is the Juilliard Symphony Orchestra. It’s free, and if that’s not a bargain then I don’t know what is.

With attendance at classical music performances sliding, according to the National Endowment for the Arts’ most recent Public Participation in the Arts survey, free access to the best and brightest seems a happy way to reverse this trend.

Last night, the group continued its 2010-2011 season with a performance of Webern’s Passacaglia, Mozart’s Sinfonia Concertante, and Schumann’s Symphony No. 4 in D minor.

Now, I’m not one to queue up in the cold for the latest X-box game or Broadway show or designer collaboration from H&M, but this was totally worth the 30 minutes or so I spent in the cold waiting for a standby ticket, listening to a young producer from ABC News talk about a story on a transgender camp for children and how “she was honest” and told her boss that she “just didn’t get it.”

Once inside Alice Tully Hall, the orchestra was amazing – kind of one of those situations where there isn’t a rotten apple in the basket. The violin and viola soloists in the Mozart – my main reason for turning up – left little to be desired, either.

The soloists were Elzbieta Weyman on viola and Sheryl Hwangbo on violin, both master’s students at the school. Hwangbo had one small hiccup in the first movement – a lapse in concentration, it seemed, on a not so difficult part – but both produced really amazing, beautiful tones.

My only complaint was Hwangbo’s strapless gown, which she incessantly fiddled with throughout the performance to keep it in place. This was distracting and couldn’t have been much fun for her.

But as I mentioned, as far as bargains go, this one is hard to beat.

There are about nine more concerts left in the orchestra’s season – more info is available on the school’s website. 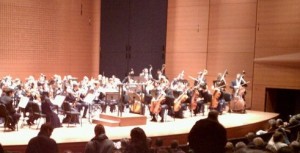 This entry was posted in Uncategorized and tagged elzbieta weyman, juilliard, sheryl hwangbo. Bookmark the permalink.

1 Response to Juilliard Orchestra in Concert