Arancini Brings Italy Back to Bushwick 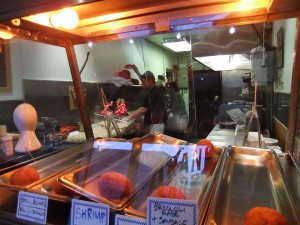 See arancini be made on the spot at Arancini Brothers in Bushwick.

The bright blue “Arancini Bros.” sign reads “we’ve got balls,” and they aren’t kidding.  But they mean rice balls, the Sicilian street food, and it’s the newest edition to the Bushwick food map.

Arancini are risotto balls covered in breadcrumbs, fried to a golden hue and can be filled with anything you can imagine: from the savory; meats and seafood, cheeses and vegetables, to the sweet; chocolate and strawberries. Sold on the streets of Sicily and said to date back to the 10th century, the tennis ball-sized foods are sold for $3 out of the recently reopened storefront in Bushwick, Brooklyn.

Traditional fillings like ragu (a tomato-based ground meat sauce, in this case made with beef and pork) and carbonara (eggs, pancetta, pecorino, and pepper) offset the more experimental shrimp (with parsley, cream and shallots).

The shop is approriate as an homage to the neighborhood’s Sicilian past. “It’s something that I grew up having,” says Campaniello who has family from Naples, Italy.  Being surrounded by Italian foods as a kid launched his love of crispy-golden-on-the-outside-gooey-on-the-inside arancini.  Though he learned partially from family it was two weeks of touring kitchens in Sicily where he found the best practices for making them.

Campaniello, cited the number of new restaurants poised to open that made the location ideal: “It seemed like it’s the perfect spot to be just because of everything that’s happening in Bushwick right now.” After their Sicily tour, Levatino and Campaniello enthusiastically took up residence in the once-empty kitchen and brought a little Italy back to Bushwick.