A group of young Brooklyn residents gathered at the Tip Top Bar in Bedford-Stuyvesant last night to display drawings, photos, even to perform songs and poems for the second annual Fun-a-Day show. Though the scene quickly took on the appearance of an art show, this was not your standard gallery opening.

Fun-a-Day originally began in Philadelphia in 2004. The concept was created by a Philadelphia art group named The Artclash Collective with the mission to have non-artists share works that they made daily during the course of one month. Now in eight cities across the country, these shows take place in either February or March—just after each month-long period ends—and have a timely peg. 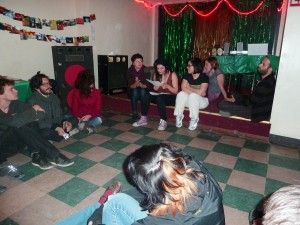 “It’s a way to fixate on something else besides winter dragging on,” said Lauren Melodia, one of the event’s organizers.

Judy Shatzky, a Bedford-Stuyvesant resident, said participating in Fun-a-Day this year was a productive outlet to have during the cold month of February. She said it allowed her to get back into figure drawing, which she had lost touch with years ago. With daily practice, she said, she noticed the benefits.

“I got back to the level where I was back in high school,” she said. 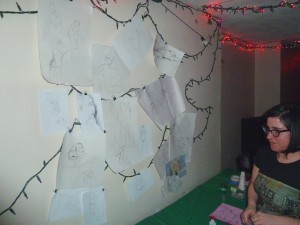 Judy Shatzky hangs her collection of figure drawings that she made in February.

Diana Roffman, a resident of Prospect Lefferts Gardens, took on two daily projects in February. First, she wrote odes about daily events in her life, which she said helped her find joy in each day. She also chose to cook a different vegan item of food every day for culinary variety. If she hadn’t participated in Fun-a-Day, she said, she would have considered sledding off a friend’s roof for a thrill.

“This is a much better alternative,” she said.