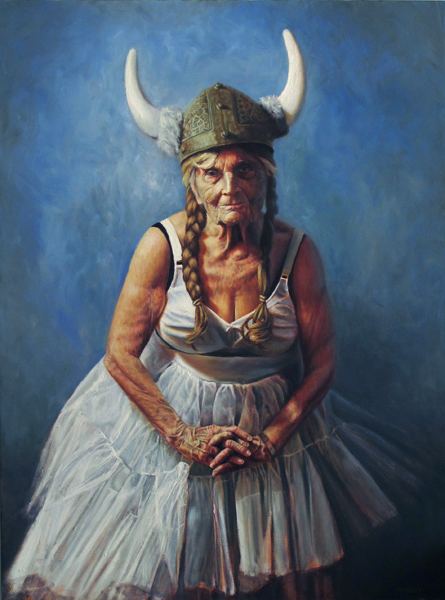 Painter Jason Bard Yarmosky graduated from School of the Visual Arts last year, and has already been successful in launching his career.

But he hasn’t forgotten his roots. In fact, they’re helping him succeed.

Yarmosky’s latest series, “Elder Kinder,” explores concepts of play and exploration, and applies it to the elderly.

For models, he used his own grandparents, Len and Elaine of Poughkeepsie. In Yarmosky’s works, the two wear a variety of costumes, from cowboy and football player (for Len) to a ballerina tutu and bunny suit (for Elaine).

“It’s that idea, when you’re a child and you have that freedom about yourself. And as you become an adult, there’s more constraint on how you should act in society and have that responsibility,” he said.

“And when you go from adult to elder, that same theme reoccurs.”

For Yarmosky, this collaboration is just a natural extension of their bond. He’s been close to them since he was four years old.

“Ever since I was a kid, I used to give them drawing lessons for a dollar,” he said. He also speaks with them every day, and considers them a second set of parents.

Working on the series, Yarmosky took suggestions from his models for ideas.

“My grandfather’s excited, and he’ll call me when he has an idea when I go out to look for costumes,” Yarmosky said.

Like the Spice Gallery owner Marisa Sage found Yarmosky through a mutual friend that curates SVA students’ work for the Aqua Art Miami 2010. Sage first met the artist while visiting the show.

“I just thought it was actually really funny,” she said of Yarmosky’s work. “The first thing I looked at, I thought, ‘this is hilarious.’ And obviously well done.”

Next up, Yarmosky is planning on continuing the series through a superhero theme. He’s already completed sketches featuring Len in a Batman costume.

Yarmosky said his grandparents haven’t yet vetoed an idea or costume.

Grad student at CUNY J-school. I'm interested in writing, new media and entertainment (among many other things).
View all posts by Sarah Ewald →
This entry was posted in Uncategorized and tagged Aqua Art Miami, Elder Kinder, Jason Bard Yarmosky, Len and Elaine, Marisa Sage, School of the Visual Arts. Bookmark the permalink.