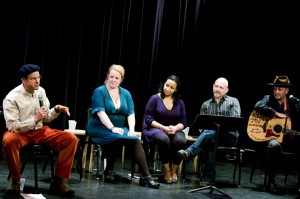 Dan Baum arrived in New Orleans on August 31st, 2005, two days after the levees broke. He was there to cover Hurricane Katrina for The New Yorker and his work focused mostly on the disaster alone: the police department, the numbers dead, unknown to be dead; the aftermath of facts.

While writing those facts, Baum began to realize that New Orleans is quite a city. “A weird place,” he said, “complicated and sensual.” Triumphant and broken and beautiful. A place rich with history and culture, and most importantly, people and their stories.

In the introduction his book, Nine Lives, Baum explains: “The nine intertwined life stories offered here are an attempt to convey what is unique and worth saving in New Orleans.”

The book follows its characters from from 1965, when Hurricane Betsy struck the city, up until 2005. Katrina does not show up until page 200.

At Symphony Space last Sunday, Baum said the book contained “nine true stories, written in the language of the people who told them.” But truth has many meanings. In this case, the truth as told to Baum. “As I told my former editor at The New Yorker, New Orleans is not a very fact friendly place, ” he said.

Baum typed the oral histories of each of “The Nine” at the speed they told their stories. “The way people talk in New Orleans…it felt like I was playing the piano, ” he said.

The musical quality of the stories Baum typed were not lost in his book, nor on composer Paul Sanchez and lyricist Colman DeKay. With funding from the fan-based Threadhead Records Foundation, they adapted the book into an album intended to be the soundtrack for a Nine Lives musical. The album features more than 100 musicians from New Orleans, including the Mayor, Mitch Landrieu, whose vocals are on the final track “Rebuild, Renew.”

At Symphony Space, Sanchez performed nine songs intended for the musical, alongside singers Arsene DeLay, Deborah Davis and Tony Award winning actor Michael Cerveris, who is also producing the play and guiding its way to the stage.

In the introduction the evening, billed “A Musical in the Making,” Cerveris said the play would be workshopped and hopefully performed in New Orleans, with the dream of eventually bringing it to Broadway. “Theater and Broadway are starved for something human,” he said. “And they haven’t heard music like this.”

Sanchez said the musical’s central character is the city. “Forty years in the life of this beautiful character named New Orleans.”

Where are the Bodies? Nine Lives: A Musical in the Making at Symphony Space from Hannah Miet on Vimeo.