The Power of Language 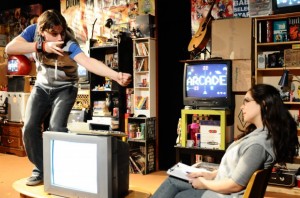 Great entertainment is all about suspending disbelief. We know our favorite movies, plays and anything else entertainment related are all about things that aren’t, in fact, real. But, in one way or another, if we can think that what we’re watching could happen, for just a split second, then it’ll be something we’ll remember and enjoy for the rest of our lives.

Such is this case in the New York Theatre Experiment’s “Up, Up, Down, Down,” as it manages to take us on a wild ride that contains classic video game jargon, a terrorist conspiracy, a love story and a theme that can be described as coming of age.

Allyson Morgan plays the main character, Joy Flanagan, a nerdy video game arcade clerk, who manages to find true love and solace from her darkest emotions. In the span of two hours, Morgan makes herself a compelling and realistic character. She believes the production’s playwright, Barton Bishop, was able keep theatre goers intrigued in spite of the wackiness, because of simple and realistic language.

“The first time I saw the script, I absolutely fell in love with it,” Morgan said. “I’ve known Barton for a long time and I’ve always loved his writing because it’s so conversational. He’s able to have the audience connect with all of the characters on the stage. Even though I didn’t know some of the video game references he made the first time I read it, when I heard the giggles in the audience the first time we performed, I knew he did something special.”