A Very Big Production for a Very Small Audience

The brick brown structure which resembles a home you only see in fairy tails, tucked away behind a wall of leafless trees, is one of New York’s 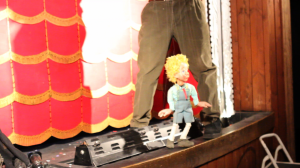 A classic Marionette from the Swedish Cottage

most best kept performance theaters. The Swedish Cottage located in Central Park, is host to the Marionette Theater; puppet performances for some of New York’s littlest audiences.

“Human shows are different than puppet shows because the actors in puppet shows break more easily and they have to get mended that much more.” Said Kervin Puraota, a puppeteer for almost six years and one of the theater’s leading marionette artists. 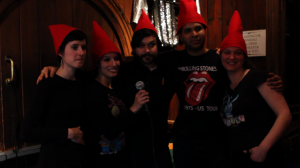 The Master Marionettes from the Swedish Cottage Theater

With all the specialized education the backstage actors, or professional puppeteers as they like to be called, must receive in order to effectively do their jobs G.V. Maldonado, another lead marionette artist, summed up the best part of their job as, “coming to the cottage every day and getting to perform here in this beautiful nook in Central Park.”

The audience, which is mostly comprised of children ages six months to six years, are in awe and amazement of watching three dimensional players on a very small stage move through a half an hour story. It  is enough to keep them smiling, oohing and aahhhhing all the day through. 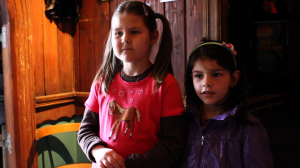 Best Friends Emma and Marisol visit the cottage as much as they can.

On the Sunday that I saw the production with my two daughters, the non narrated show, “The History of the Swedish Cottage,” was a musical tale  about how the Swedish Cottage came to be in Central Park in the 1800’s. The three act show consisted of the history of the Cottage, how it is currently used and a look at how it will be used in the future; all told through the movement and sounds of an octopus and his friendly underwater friends.

Good friends Emma, age seven, and Marina, age six, are regulars at the Cottage. “I really love the puppets,” says Marina, “they are funny and always make me laugh.” The best part of the show for the best friends was when they were allowed to play with the puppets at the end of the show.

The Marionette Theater at the Central Park Swedish Cottage has performances everyday and for show times or to purchase tickets click here.