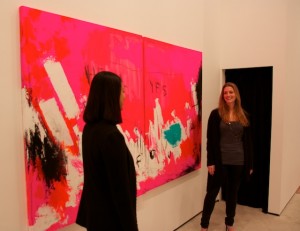 Back in 2005, Forbes writer Liz Tunick started seeing a trend in the art world.  Groups and clubs were emerging for young art enthusiasts that could not only afford the time and money to visit museums and galleries but who also had the cash to buy art.  Major museums developed young patrons groups, including the Met’s Apollo Circle and the Whitney’s Artists Council.

But recently the potential value of young art collectors for museums has come into it’s own.

Since 2008-2009 with the economic recession, museums and galleries started to slash budgets, as the value of endowments fell and one of the most obvious cost-cutting devices was simply to stop buying new pieces of art. Suddenly encouraging private collecting became important to a museums survival. With museum departments already devoted to cultivating wealthy collectors their focus now includes young collectors.

“We very much rely on donations from individuals,” says Donna De Salvo curator at the Whitney Museum, “there is just not the adequate funds to purchase works as anyone would like to.”  Talking about the current exhibition showcasing the collected donation of trustee Emily Fisher Landau, De Salvo says it “highlights the importance of this type of philanthropy and patronage to a younger generation.”

One Thursday evening in late February on Hester Street in the Lower East Side, a bright glow from a window enticed a group of young wealthy business types into the Lu Magnus Gallery.  The collected group, who drank and ate canapés while listening to the gallery artists talking about their work, were members of The Contemporaries.  A group set up in 2003 by two Harvard Business School graduates who work in finance but have a passion for art.

Lu Magnus directors Lauren Scott Miller and Amelia Abdullahsani partnered with The Contemporaries for this event as they share a belief in a more inclusive art world.

“Before we started the gallery friends of ours were interested in art and worked in finance felt that it was difficult to engage with art,” says Miller. “Which is one of the reasons why we wanted to have events such as The Contemporaries evenings at our gallery.”

The Contemporaries membership is growing according to its founder Rodney Reid.  The LES gallery event was a sure sign that there is not only a need for young collectors to sustain the art world but also the demand for events in the art world to involve and sustain them.

This entry was posted in Art and tagged Lower East Side, young art collectors. Bookmark the permalink.