Smack Mellon Provides Artists With a Room of Their Own 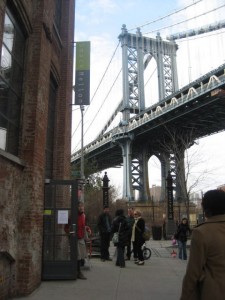 The program was established in 2000 in response to the severe lack of affordable workspace for artists living and working in New York City. Each year it provides six artists with a free private studio, a shared technology lab, access to a wood, metal, and general fabrication workshop, plus a $5000 fellowship.

Rent for workspaces in Brooklyn and Queens currently ranges from $300 to $800 per month, or  $1.50 to $4 per square foot. Membership to communal workspaces offers a slightly cheaper option.

Katherine Gressel, Smack Mellon’s Programs Manager, explains, “Affordable workspace in New York City is extremely difficult to come by and not having a space really limits the type of work [artists] make.”

Ivan Monforte, a 2010 resident at Smack Mellon, echoed Gressel’s statement. Monforte worked in his Long Island City apartment prior to being awarded his current studio. Like many emerging artists he works full-time to support himself, but still could not afford to rent a separate workspace.

Since much of his work is conceptual, Monforte can work without a designated space. However his residency at Smack Mellon allowed him to return to his first love, photography.  Monforte used his studio space to shoot portraits of transgender men. The blank walls and closed door allowed him to “create a world” in which his subjects felt safe to “open up and participate in an exchange.”

For Monforte, as for many artists, “a studio is not just a place of production. It’s a symbolic space, a place to go to think, to be by yourself, and to create.”