Sex Workers say “No Justice, No Piece” with Stories

You may not have known that March 3 was International Sex Workers Rights Day. Ten years ago, thousands of sex workers took to the streets of India to protest the violations, violence and discrimination they experienced every day.  The day is celebrated by sex worker 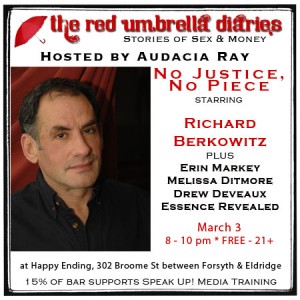 activists and allies alike every year with everything from potlucks to vigils. Stories told by those most affected by the stigma is an essential part of the celebration and the “Red Umbrella Diaries” is where to find them. The monthly readings are hosted by activist and former sex worker Audacia Ray at the aptly named Soho bar “Happy Ending.”

When sex work pops up in the media it’s usually not in a good way. An important someone in office is busted with a prostitute, a teacher’s porn past comes back to haunt her or another body is found and the last place she was seen, if she’s identified, was getting into a stranger’s car. But the Red Umbrella Diaries aims to put faces to sex workers, the issues they encounter and to let them tell their stories themselves. “Everyone has a story,” says the website “and the people who are best equipped to tell the stories of people in the sex trade are the people who have personal experiences in the industry.”