A Dose of Brazil in Brooklyn 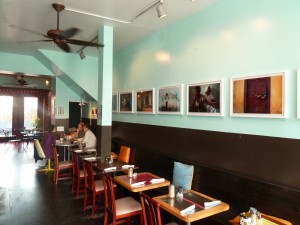 "Brazil: Two Weeks Along the Back Roads" on display at The Pillow Cafe in Clinton Hill, Brooklyn

Twenty portrait photographs line the interior of The Pillow Cafe in Clinton Hill, Brooklyn. Evenly arranged in gallery style, these digital prints comprise a new photo exhibit entitled “Brazil: Two Weeks Along the Back Roads,” which lasts until May 15.

Geralyn Shukwit, a Clinton Hill-based photographer, is the creative force behind the show. The exhibit is the product of a two-week traveling photography class she took in northeast Brazil this past January. Led by the renowned photographer Ernesto Bazan, the excursion aimed to teach each participant to make art in an unfamiliar environment. 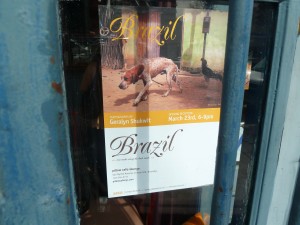 Shukwit had never before been to Brazil and does not speak Portuguese. She said the greatest challenge came from approaching people to ask for photographs of them. But she moved past this challenge and said she feels proud of the images she captured.

“I don’t try to instill my views on people,” said Shukwit about her artistic mission. “I just show them what I see.”

Despite the poverty and drugs she saw around the region, Shukwit said she felt the beauty of each village she passed through, and her photographs reflect that. The collection of portraits show children and adults with calm expressions on their faces, which she said characterized both the region’s spirit and its relaxed pace. 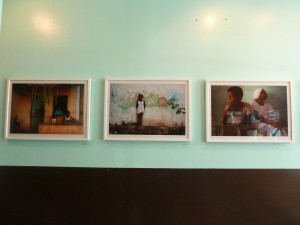 “There’s a we’ll-watch-the-world-go-by attitude,” she said.

Shukwit’s exhibit is part of an ongoing series of shows at The Pillow Cafe produced and curated by local artists. Robin Richardson, owner of The Pillow Cafe, said that each exhibition adds a good dose of color and character to the space. Generally, there’s a day-long gap between shows, said waitress Naudia Jones, which gives the cafe a different feel.

“You can really notice the space when it’s empty,” she said.

This entry was posted in Art, Culture and tagged brooklyn, Clinton Hill, photography. Bookmark the permalink.