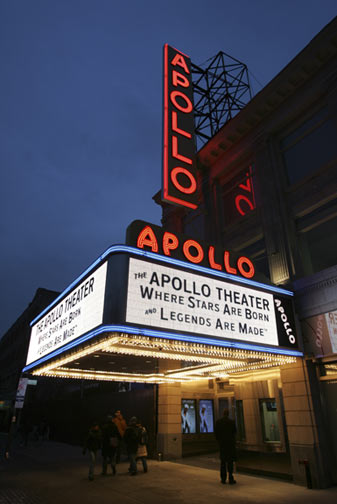 New York City’s Apollo Theater made the news in recent years mainly for holding such events as Michael Jackson’s and James Brown’s memorial services, or Obama’s fundraiser in 2007. There’s was a time though when The Apollo was a symbol for black American culture that changed for good popular-music in the 20th Century.

“Ain’t Nothing Like the Real Thing: How the Apollo Theater Shaped American Entertainment” is the title of an exhibition created by the National Museum of African American History and Culture to celebrate the theater’s 75th anniversary and its rich cultural heritage. After being showed in Washington and Chicago, it has finally hit “home” and it’s currently hosted by the Museum of the City of New York in Spanish Harlem.

The exhibit consists mainly of a series of chronological panels and photographs telling the story of the Apollo and linking it to Harlem’s evolution during the last century. It’s surprising to learn that The Apollo started as a segregated burlesque venue devoted to vaudeville style performances. It all changed though in 1934 when the theater was bought by Frank Schiffman, a white Jewish promoter and big fan of what was known back then as “race” music. Around that same time, a movement named the Harlem Renaissance began a cultural, artistic and musical boom in the area, which The Apollo took a huge advantage of introducing a performance contest called Amateur Night.

The most impressive panel in the exhibition is precisely the one that includes the list of winners of Amateur night: Ella Fitzgerald, Billie Holiday, the Isley Brothers, Jimi Hendrix, the Jackson 5 or Gladys Knight are among them. Other big names that owe much of their careers to The Apollo are Ray Charles, James Brown, Marvin Gaye, Stevie Wonder, Diana Ross, Aretha Franklin and Mariah Carey.

What would draw more visitors to the exhibit though probably are the items that belonged to some of those artists that are also in display: a Michael Jackson’s Fedora, one of James Brown’s colorful suits, Louis Armstrong’s trumpet, a dress that Celia Cruz used to wear…

“I remember being blown away in my childhood when my father played James Brown’s Live at The Apollo in the car,” said Lidia Ponce de León, a Spanish architect who is currently living in New York and visited the exhibit. “But I never understood what this theater was really about until now.”

The visit to the museum could be complemented with a visit to the actual Apollo, that will host again Amateur Night starting April 6. Things have not changed much in this mythical avenue’s main event, except that Ella Fitzgerald won $25 in its first edition and now the winners can take home $10,000.

“Ain’t Nothing Like the Real Thing: How the Apollo Theater Shaped American Entertainment” is on view through May 1 at the Museum of the City of New York, 1220 Fifth Avenue; $10 adults, $10 students, seniors; mcny.org.