Danny Stiles, the Vicar of Vintage Vinyl: Dead at 87 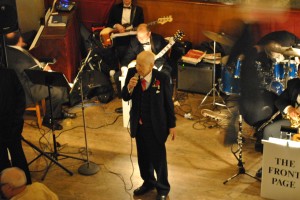 Danny Stiles had 63-years on the radio and a quarter of a million records in his collection.  The 87-year-old radio deejay passed away from complications of heart problems on March 11, 2011. The “Vicar of Vintage Vinyl” left behind a legacy of oldies but goodies and a legion of fans. Stiles has not been forgotten–from the tribute posts on his facebook page to the call-ins on the tribute WNYC radio show his passing signals the departure of a bygone era of radio.

Stiles spun records at 27 different New York area radio stations in his lifetime. At his birthday party at John’s Pizzeria in December he perked up when asked about contemporary music: “I think it’s terrible. I don’t understand it–I can’t understand the music. I can’t decipher the lyrics and the melodies all sound the same.” He thought that things started to go down-hill after the Beatles.  Elvis, he said, was all right.

“He was a great guy, I’ve known him since the ‘70s,” said band leader Vince Giordano. Vince of Vince Giordano’s Nighthawks, had known Stiles from their early days together at the now defunct Red Jacket jazz club. Giordano recalled how they used to try to “stump the chump” on obscure tunes from the ‘20s, ‘30s and ‘40s.  Giordano said that Stiles was hard to challenge when it came to obscure big-band knowledge.  He managed to stump him with a reference to “an obscure dance band from the Mid-west.”

Stiles counted “Body and Soul” by Coleman Hawkins as his favorite song, even though choosing was one difficult. When asked how long he’ll be on the radio Stiles said, “As long as I’m alive.”