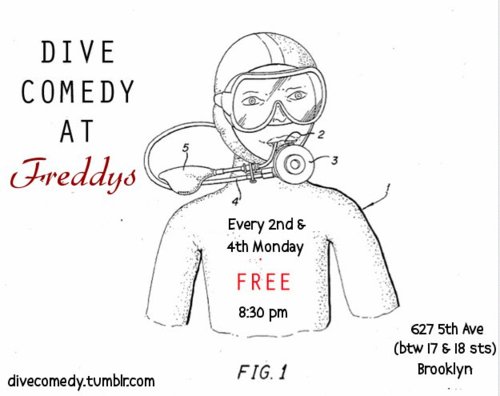 From the outset, Freddy’s Bar looks like pretty typical. But there’s more going on inside on the first night of each workweek.

During a recent Monday night, six comedians took to the stage for seven minutes each to engage the audience. Nick Mariatio recounted getting arrested while toking up on his lunch break. Dan Goodman compared the U.S.’s world status to that of other countries, drawing parallels using “Happy Days” characters.

Different emcees presents shows on alternate weeks. Hosts Giulia Rozzi and Brooke Van Poppelen co-produce the Dive Comedy Stand-Up show on the second and fourth Monday of each month. They took turns performing their own material and playing off each other before introducing the next comedians.

Rozzi started performing stand-up 10 years ago. She and Van Poppelen have been good friends for years.

“We’d done stand-up a long time, and we wanted to do a show together,” she said.

The two used to perform at Hank’s Saloon on 3rd Ave., but moved to Freddy’s when it re-opened. There’s at least one point in Freddy’s favor.

“It has a separate room from the bar, which Hank’s didn’t have,” Rozzi said.

Comedian Calvin Cato started performing five years ago while at Wesleyan University. This was his first time with Rozzi and Van Poppelen’s show, though he has performed in the bar with Pat O’Shea’s show, which runs on every first and third Monday night.

“Pat’s show has been around for over 5 years so I think it’s taken on a very distinct character,” he said. “Brooke and Giulia’s show is fantastic as well and a lot of fun, and it has a more casual vibe.”

Comedian Sean Donnelly has been performing for five years.

He tried out some new bits on the audience Monday night.

“It was maybe 25 percent new,” he said. “It depends on the show, the amount of new material.”

The next night, Donnelly was scheduled to perform at Caroline’s on Broadway.  Since it’s an esteemed established club, Donnelly said he’d be playing it safe with his material.

But that’s not the case with all venues.

“With the bar shows, you can do whatever you want,” he said. Donnelly tests out new material with these crowds.

This was Donnelly’s first time performing at Freddy’s. Rozzi and Van Poppelan contacted him.

“Brooke and Giulia are two of the funniest comics in the city,” he said.

Comic Bryson Turner attended the show to see his friend Lucas Molandes, who performed. It was his second time seeing a show at the venue.

“Most shows, especially with the rapid-fire format, go on too long, but not this one,” he said. “I had a good time.”

Freddy’s stand-up comedy runs every Monday night at 8:30 p.m. The bar is located at 627 5th Avenue between 17th and 18th streets, off the Prospect Avenue subway and B63 bus stops.