“Queloides” Examines Scars of Racism in Cuba through Art

Racism is something that you don’t talk about in Cuba, except in hushed tones. So when a group of artists decided to take it on in a show called Queloides (Keloids) one can imagine the reaction they would get.

Queloides opened in New York City on April 12, with a mission to display the variety of experiences Cubans had when it came to racism. “People thought the only thing that Afro-descendant people were good at is sports and music,” says Queloides curator Elio Rodriguez about the Cuban expectations for the large Afro-Cuban population on the island. 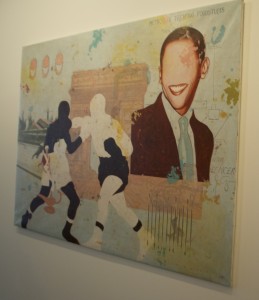 Smile, You Won! By Alexis Esquivel

the years of slave trading that happened on the island many years prior to the Revolution.

Cuban artists from all over the world are in the show and a variety of work is featured. From installation pieces to photography to video and oil paintings Queloides has 21 pieces on display in the airy 8th floor gallery on 17 West, 17th Street.

For example the installation “Ave Maria,” has a collection of sculptures depicting the Virgin of Charity El Cobre, the patron saint to Cuba, sitting on top of a bright blue plank. The sculpture by Meria Marrero and Jose Toirac extends the length of one end of the gallery and shows how many depictions a cultural figure can have within a diverse society. 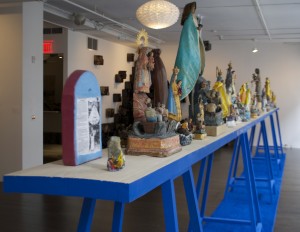 Ave Maria, by Meira Marrero and Jose A. Toirac

The Castro Revolution claimed to have done away with racism when his party seized power in the 1960s. Though years of revolutionary discourse in Cuba claim to have banished systems of oppression common to Capitalism, power structures like racism never really went away. “You can’t just erase something with a couple of laws,” says Rodriguez “I mean this is something that came from the 18th Century.”