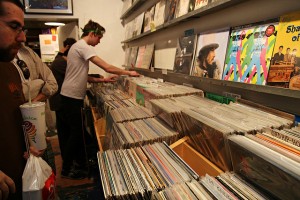 Music geeks have a lot to look forward to this weekend. Saturday, April 16, is Record Store Day, an annual event when musicians put out new releases or reissues that are sold exclusively through independent record stores.

Rare reissues are expected from much-beloved bands like The White Stripes, Nirvana and Sonic Youth. Other fan-favorites — such as Radiohead, The Decemberists and of Montreal — will release new material.

Record Store Day is an effort to remind listeners of the importance record stores once played, and can still play, in discovering favorite artists and albums.

Unfortunately, with so many exclusive releases hitting shelves on the same day, there’s a risk that the focus of Record Store Day could shift from supporting local record stores to building record collections.

“Now, it’s more become ‘You’ve got to collect all the limited releases!'” Jones said. “And it’s basically more of an eBay holiday than support your local record store holiday, which is fine. It’s the nature of the collector.”

To stir up further excitement, artists make special appearances at various shops. Dream-pop duo Damon and Naomi will perform at 7 p.m. at Sound Fix. Other Music will host a live concert from Regina Spektor at 2 p.m. To gain entrance, be sure to be one of the first 100 people to buy Spektor’s Record Store Day 7″ from Other Music.

Photo from Record Store Day 2008 at Other Music courtesy of graciepoo via Flickr.