Lesser-Known Sports Heroes For the Win 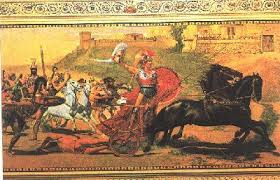 Scene from the Iliad (Creative Commons)

The hero trope in the world of sports is nothing new: even Patroclus’ funeral games in the Iliad weren’t the first time athletic achievement was used to signal heroism. (We’re talking about heroism as defined by excellence and by striving, not just by what the Atlantic’s Rob Goodman calls “social usefulness.”)

And being a hero means getting a statue, right?

So in an interview this week with Sporting News, Kareem Abdul-Jabbar made the case that the lack of a statue of him at the Staples Center, home of the Lakers as well as several sculptures of athletes, is a major slight to his legacy.

But in the world of sports, it’s not the statue that defines the hero narrative. It’s the story.

Real life Rocky and Rudy stories are better than the movies. Plus, they can make lesser-known athletes memorable. Sports-journalism profiles are responsible for a lot of those cases. Here are a few of the best stories out there of athletes made larger-than-life by journalists—often beyond the scope of their own achievements. You may not care about wrestling stats or triathlons or statues at the Staples Center, but after you read these pieces, you’ll never forget the names.

And there’s hope too for those of us who lack the hand-eye coordination, upper-body strength, lung capacity, or plain-old pluck to be a sports hero! Frank Deford’s “Sometimes the Bear Eats You: Confessions of a Sportswriter” (Sports Illustration, March 29 2010) will be a comfort to anyone who wants his life story immortalized alongside those of Achilles and A-Rod, but would rather be writing about the game than playing it.

This entry was posted in Sports and tagged hero, heroism, reading list, sports. Bookmark the permalink.