Think You Know How To Dance? You’re Probably Wrong (Update)

I changed the design of the quiz to make it a little more animated. I also reworded some of the questions to make them a little more understandable. I also added two more sources to the blog post so it talks a little more about copyright in dance. 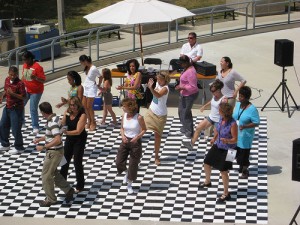 Go to any Sweet Sixteen, Bar Mitzvah or wedding this summer and you’ll undoubtedly get a chance to do the Electric Slide or the Hokey Pokey or The Chicken Dance. But be careful you don’t miss any steps or Richard Silver will be after you.

Though it seems a little farfetched that you could sue someone for doing a dance wrong, according to the Digital Millennium Copyright Act rights-holders can complain to services like YouTube that content uploaded by users infringes their copyrights.

Most people are aware that they are doing something illegal when they upload a pirated movie, but have no idea they could be forced to take down a video of their family. But maybe even more importantly, a lot of these people don’t realize they’re doing these dances wrong.

“Ballet is very specific, but something like the Electric Slide doesn’t seem like it should be,” Desiree Duarte, a former Broadway dancer, said. “When you’re dancing at a party you shouldn’t be worried about counting your steps.”

Duarte, who now teaches dance at Art House Astoria in Queens, admits as a choreographer it can be frustrating, especially when choreographers get little credit for the dances they create.

In an article by Julie Van Camp, she explains that the definition of a “choreographic work” has never clearly been defined by the Federal Copyright Law of 1976 making it hard for choreographers to know whether their works qualify. Currently the definition the courts uphold excludes purely social and recreational dances like those you perform at a family gathering. Silver’s Electric Slide is an exception since it was originally performed by a company of dancers for a nightclub opening.

On February 16, 2011, the Electric Slide was legally claimed by Ric Silver under the seal of Copyright Office. Though he is now receiving compensation for anyone wanting to use his dance, he still spends his time correcting those doing his dance wrong.  Tina Williams, owner and director of Precise Dance Studio in Woodside Queens stands behind what he is trying to do. As a dancer with the Alvin Ailey Dance Company she took pride in the works that were created and how they were created.

“These works didn’t come from thin air, someone worked to make them just right,” she says.

Though Williams admits she doesn’t actually know how many steps are in the Electric Slide (there are 22 total) she thinks it is important to stress the purity of these dances. “Someone worked hard to make these dances we know and love,” she says. “Now we just have to make sure they’re doing them right.”

How well do you really know your favorite party dances? Take the quiz and find out!