New Life for One Brooklyn Church

Rainwater, snow and wind swept through the broken stained glass windows at Rugged Cross Baptist Church for years. Plaster on the walls crumbled, exposing some of the wooden beams that held up the nearly 100-year-old structure. 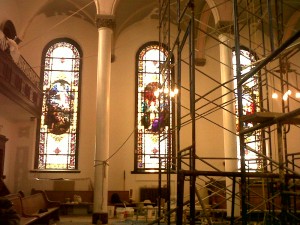 “When we moved here it was beautiful, but as the years went by, it deteriorated,” explains parishioner Maggie Daughtry, who joined the congregation in 1982.

But now, the church, which sits just off the corner of Lafayette Avenue and Patchen Avenue in Brooklyn, is undergoing some major changes.

With public funding and help from the New York Landmarks Conservancy, the religious institution is being restored as part of the conservancy’s Sacred Sites program, which aims to restore houses of worship across New York State. 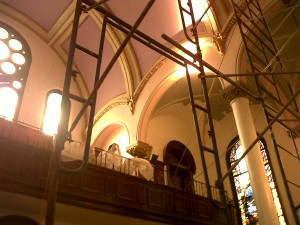 The non-profit group learned of the crumbling church when, six years ago, the church’s pastor, Rev. Emma Knox called for help.

“They called our preservation hotline because they had an altar window with a crucifix and the upper half of Jesus was literally failing out of the building,” recalls Ann Friedman, director of the Conservancy’s Sacred Sites program.

Leaks in the church’s ceiling were damaging its original gas light fixtures and a bronze lectern, Friedman explains.

After visiting the site, the Landmarks Conservancy awarded the church a $70,000 grant for its restoration. 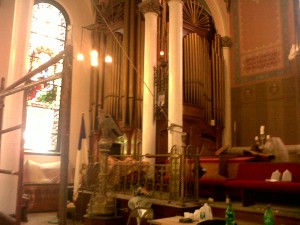 The exterior has now been restored, but Mohamed Patwary, the contractor in charge of the restoration, says he and his 11 workers have a month of work left to do on the interior, including plastering and painting the ceiling.

“But Jesus is back in the building,” Friedman says.

By July, services now held in a carpeted room with metal chairs in the basement, will return to their rightful, light-filled space.

This entry was posted in Art and tagged profile. Bookmark the permalink.