The many faces of Shakespeare 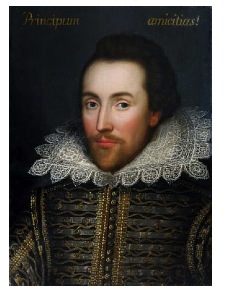 The Cobbe Portrait. Courtesy of The Morgan Library and Museum

He is arguably the most famous writer in history, but still no one’s sure what he really looked like.

The Morgan Library and Museum of New York’s new exhibition, “The changing face of William Shakespeare” seeks to answer that question.

The star exhibit is a previously unidentified portrait, the Cobbe portrait, which was unveiled two years ago by the Shakespeare Birthplace Trust in Stratford-Upon-Avon. Experts say it is the only surviving contemporary likeness of Shakespeare. Its apparition created quite a great deal of echo in the press all over the world, and now it’s the first time that the painting is being exhibited in the U.S. 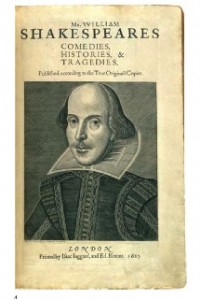 Shakespeare's portrait engraving as appeared in the first edition of "Comedies, Histories and Tragedies." Courtesy of the Morgan Library and Museum.

Until 2009, the only authenticated testimonies of Shakespeare facial features were a bust erected in a church in his native town and an engraving in the first printed compilation of all of his works. Both were posthumous and considered by experts of primitive execution. Moreover, the two of them don’t bear much resemblance.

As the exhibit explains, experts are not all in agreement that the Cobbe portrait is really a painting of Shakespeare. Though scientific examination proved it to be the prime version of a large number of copies whose subject is traditionally identified as the dramatist, there are also many arguments claiming the contrary. Some experts say that the man depicted in the portrait looks too young to be forty-six years old, which Shakespeare would have been in 1610, the approximate date of the original painting. They also say that the man’s clothing is too aristocratic for a playwright, as it’s believed to cost over $11,000 if it was made today. But the main difference between the recently unveiled portrait and the two previously authenticated representations of Shakespeare is that in these he appears practically bald, while in the Cobbe portrait he still has a great deal of hair, and all of them are believed to show the author in the last years of his life.

“The issue of determining authentic lifetime portraits of William Shakespeare is a fascinating one and the recent identification of the Cobbe portrait adds to the debate,” said William M. Griswold, director of The Morgan Library and Museum in a press release. “This exhibition provides context for a discussion that is certain to continue among scholars and those interested in the work of history’s greatest playwright.”

William Gilbert, an English professor at the University of Houston, came all the way from Texas to see the exhibit. “He was very famous in his own day and yet it was strange that all of his portraits were painted after his death,” said Gilbert. “He is a wonderful author and he has the capability of creating mystery in the public’s mind like no other.”

The writer’s physical appearance is not the only aspect of his life that has stirred debate among scholars. The authorship of some of his works and even his sexuality had also been questioned, although he was married to Anne Hathaway for 33 years. In the Morgan Museum’s exhibit there is a copy of “Venus and Adonis,” Shakespeare’s first narrative poem published, which contains “what critics regard as Shakespeare’s most graphic depiction of homoerotic sexual excitement,” as presented in the exhibit.

“It amazes me how little do we know about the life of someone who could write works of such caliber,” said Dr. Debdutta Ray, a professor of Human Resources from New Delhi, India, who is currently visiting New York and came to see the exhibit. “I don’t mind, I still love Shakespeare,” he said.

“The changing face of William Shakespeare” runs through May 1 at The Morgan Library and Museum, located at 225 Madison Avenue.

1 Response to The many faces of Shakespeare