Posted on September 22, 2010 by Jessica Courtemanche 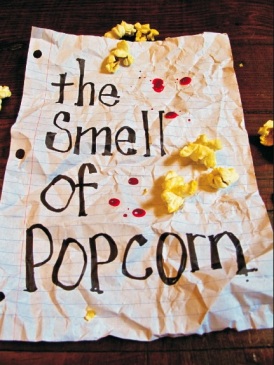 The Smell of Popcorn just ended it’s 11–day run at the Teatro IATI on the Lower East Side. The story of the play is simple: a man breaks into a girl’s apartment in the middle of the night with the intent of robbing and raping her. The drama follows what happens that night.

Despite the dark subject matter, three reasons stood out to me as to why I should see this play. First, the major attention it had gotten (it was even reviewed by The New York Times) for a small equity showcase. Second, it was the first American production of a play that has already run in 8 other countries. And third, it was presented at a Latino theatre, with a Latino writer, director and cast, and Spanish supertitles on a screen on top of the bedroom set.

But something else stood out to me, and stayed with me long after the curtain closed.

I knew that this play was based on a true story. What I later found out after speaking with Luciana Faulhaber, the lead actress, is that the female character in the play was one of José Luis Ramos-Escobar, (the playwright)’s students, Fabiola – it’s the name she uses publicly to protect her identity. She came to him the morning after the attack and Ramos-Escobar told her to go to the police.  The robber got 8 years in jail. 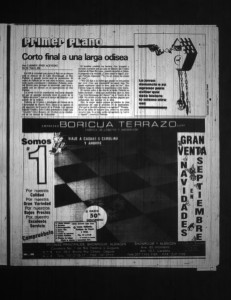 The press clipping of the original crime

But it gets more interesting: when Ramos-Escobar asked her for her permission to write about the events, she asked to play herself. He refused because, Ms. Faulhaber told me, an actor should never portray his or her own real life. The line between reality and fiction would be nonexistent, and the actor could loose self-control on stage. But this gave him another idea instead.

The play is about Fabiola and a fellow actor acting out that night’s events. 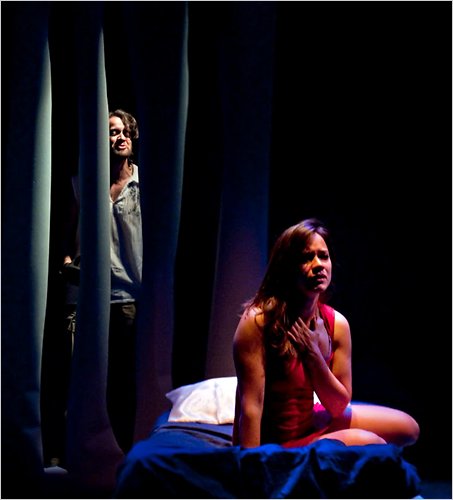 I had missed that due to the confusing start, where the two actors (Ms. Faulhaber and Javier E. Gómez) are portraying students who are rehearsing Othello.

The play is then intercepted with Fabiola and her attacker playing out either passages of the Shakespeare drama or each other’s real lives (like her father’s funeral). Which might be why I missed them literally breaking out of character for a second halfway through a scene, where they suddenly become the two acting students from the beginning of the play.

These students come back at the end, as Fabiola lets go of her emotions, crying on the bed, as her male co-star comforts her by bringing in some water.

Although I did not get the whole “actors putting on a play” while watching the performance, it stands out to me as such an interesting and unique way to portray such a dramatic real life event, and to see how it affected this actress, this woman, on so many different levels. It also gives the audience a second degree of separation from a matter that is at times very difficult to watch.