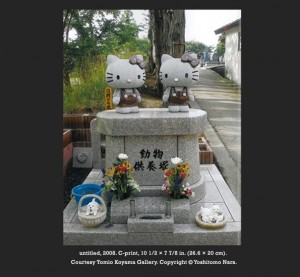 Japan is synonymous with Hello Kitty. That cute little face seems to be on everything from stationary to waffle irons. So when the Japan Society names their newest exhibition “Bye Bye Kitty!!!” it’s not just a play on words, it’s a statement.

The sixteen artists featured represent the post-war movement. Encompassing not only the country’s troubled past, but looking ahead to the future, which is more uncertain than ever. The show premiered in New York nearly a week after the disaster in Japan and definitely had an affect on how I interpreted the art.

Motohiko Odani’s collection of three wooden masks, each one looking slightly deformed, raised questions of the effects radiation has had and will have on Japan. Manabu Ikeda’s Existence, a pen and ink drawing inspired by the fig trees in Cambodia, had a morbid look of bodies being stacked on top of one another. Not unlike the photos seen days after the disaster when the country ran out of body bags.

Straying away from the country’s kawaii or “cute” art movement, these artists represent the darkness and angst that has carried through the years.

The show’s curator, David Elliott, wrote, “In a densely urbanized, highly stratified society situated in the heart of an earthquake zone, the fear that the worst could easily happen lies at the back of many minds.”

The post-war movement may be over, but the future will also be marred by radiation. What will artists take away from this tragedy?

After WWII, Japan created Godzilla, the killer monster who was spawned from the nuclear bomb. The next generation split between two movements: the overtly cutesy and cartoony art style of people like Takashi Murakami and the dark and angst-ridden art present in “Bye Bye Kitty.”

Maybe instead of monsters, said Nedu Ulaby from NPR, the Japanese need a hero. One like Spiderman, who’s run in with radiation led to greatness. Someone who can ward off the apprehension nuclear power has caused for the Japanese all along to create a new heroic art movement.

But this is for the next generation to decide. For now, while the country gets back on its feet, a sweet-faced kitty might have to do.

This entry was posted in Art, Culture and tagged Japan, Japan Society. Bookmark the permalink.