For me “Free,” an exhibit currently showing at the New Museum, called to mind an episode of one of my favorite TV shows, Absolutely Fabulous. It wasn’t that I didn’t like anything, but, rather, “Free” reminded me how subjective art is. Therefore, at points, I did find myself thinking: “I mean, it all looks like bollocks so it must be worth something…” 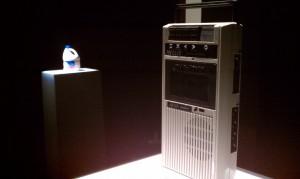 The School for Objects Criticized

This was perhaps the best part – being challenged to see the value in household objects carrying on a discourse about the future of media (Alexandre Singh’s The School for Objects Criticized) or a film running on a loop that ultimately shows some type of ejaculation (Ryan Trecartin’s riverofthe.net).

“I stand here and see that all day,” the guide on the second floor told us in reference to the Trecartin piece. “I feel like I need to go home and take a shower.” 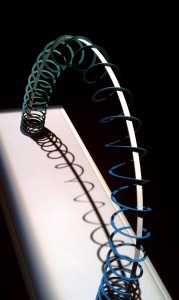 The School for Objects Criticized

Refresh, by Kristin Lucas, was laugh-out-loud funny and very germane to the current intersection of media/news/pop culture. In a day and age when Lindsay Lohan clogs the California courts with seemingly endless hearings, that Lucas petitioned a California court to change her name – from Kristin Lucas to Kristin Lucas – somehow seemed a more sensible use of the judicial system. If only Lindsay could “refresh” herself like a Web page.

In the end, I liked the overall exhibit and the questions that it raised about the value of art and the effect that the Internet has had on our perception of it, and of ourselves. Like Edina, though, I think I’m probably most interested in how much it will all be worth in twenty year’s time. I want to see the figures.

“Free” runs until January 2011 at the New Museum, 235 Bowery. Admission, which is not free unless you are 18 and under, runs $8 to $12. Free youth admission is courtesy Target, which should probably take that money and donate it to the Human Rights Campaign instead.