The internet acts as a portal to loads of free information. If you have a question, the internet (or one of its surfers) is usually capable of providing an answer.

And perhaps the worldwide leader in providing answers to random questions is Yahoo! Answers. Here’s how it works, you ask a question — any question — and Yahoo!’s users (try to) provide an answer. Simple. Democratic. Free and useful. In fact, Yahoo! users find it so useful, that it’s attracted between 35 million and 45.5 million unique visitors each month for the past year (refer to embedded chart below).

Enter Joel Holmberg’s “Legendary Account”, on display at the New Museum’s exhibit “Free“. Over the course of two years, Holmberg posed questions on Yahoo! that were meant to “subvert the simple Q&A service”.

Displayed on a blue backdrop similar to the actual Answers one, several of Holmberg’s questions and the answers he was given are scrolled across a wall at the exhibit for our contemplation.

But there’s a problem: The questions are supposed to be “too probing, too complex” for the “simple” service and its simple users. But they’re not. They’re not probing. They’re not complex. And they certainly don’t subvert the system.

For instance, Holmberg asked “How do I best convince someone I am an artist?” and “How long does post-coital last?” They’re both mildly funny questions, but they (and their answers) prove almost nothing about the free system of queries Holmberg is studying.

The answers he received were most often based on gut feeling (“With your work. Actions speak louder than words.”) and sense of humor (“till the next incidence of coital”), but they absolutely never showed the philosophical grappling Holmberg had hoped to elicit with his probing. 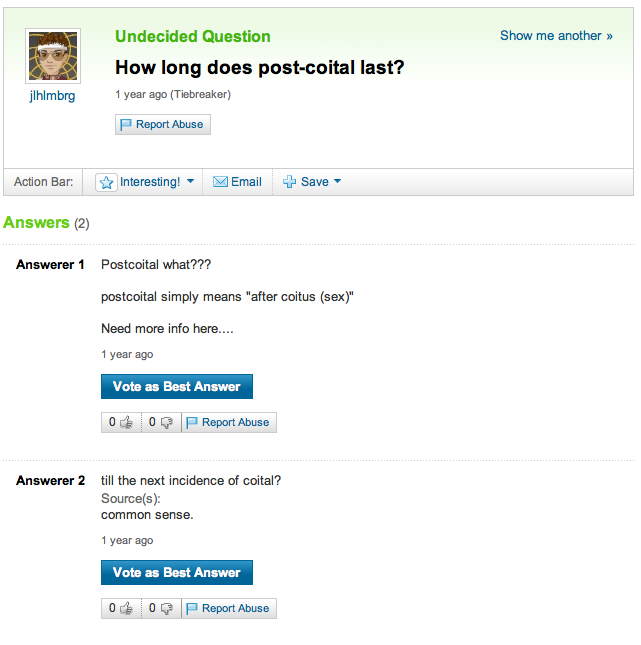 If anything is proven by Holmberg’s questions (he’s still asking, check out his Yahoo! account here), it’s that free information often comes without gravitas. When he queried “Is wireless everywhere?” (get it? his question was ironic and deep) he received several responses written authoritatively, but ultimately without any supporting evidence. Free information, sans support or depth.