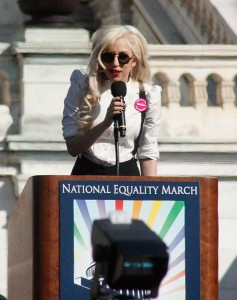 Rich Morris volunteers with Marriage Equality New York. The group, like their name states, has one goal: to legalize marriage in New York.

For the last few months, Morris has been attending Community Board meetings all over the five boroughs in hopes to sway people’s opinions. With Mayor Andrew Cuomo bringing the gay marriage issue back to the Senate, Morris also hopes to rally local political leaders.

Morris is an activist who understands the importance of a persuasive phone call.

In 2009, when Congressman Jerry Nadler (D-NY) issued a bill to appeal the Defense of Marriage Act (DOMA), three Democrats didn’t co-sponsor it.  Morris was surprised, but decided to act. “I called [the Senators’] offices and called every gay group in their city,” Morris says.

Within four days, one of those Democratic leaders had changed their mind and decided to co-sponsor the bill.

“If I am making these calls myself and it’s that easy to make changes in four days. It’s like, ‘Okay, we need to really get more people involved here,’” he says.

Recently, Lady Gaga took this idea a bit further when at a Buffalo, NY concert she asked her fans to email their State Senator Mark Grisanti, telling him to support gay marriage.

Lady Gaga then took to her Facebook, where she currently has a little more than 30 million fans, and her 8.8 million Twitter followers to do the same thing.

Overwhelmed by the responses, Senator Grisanti’s chief of staff, Doug Curella, quickly came out with a statement saying:

Sen. Grisanti has already reached out to the local chapter of Outspoken for Equality, and is meeting with them next week. Additionally, I have personally met with the Outspoken for Equality in Albany, and we had a very informative and constructive conversation. We look forward to learning more about their issues and concerns with regards to same-sex marriage.

It seems that celebrities are not just using their names to support causes, but are using their status to invoke legislative change. Have celebrities become the new lobbyists?

Natalie Portman apprehensively took to the Hill in support of Finca. George Clooney’s press conference after visiting Africa brought swooning fans. It’s no surprise that experts say famous spokespeople are a priceless. There’s even an online how-to advising people on how to get a celebrity involved in their cause.

Bono and the RED Campaign seems like the best example of the effects of celebrity. Known as a man who doesn’t mind talking, Bono spends a majority of time talking about Africa. His self-promoting ways though  have lead to meetings with world leaders like President George W. Bush, U.S. Treasury Secretary Paul H. O’Neill and Canadian Prime Minister Paul Martin. Love him or hate him, Bono has encouraged support internationally and had a hand in legislation.

You don’t even need to be an international superstar with a 20 year career under your belt, take the case of teen heartthrob Nick Jonas. After he testified before the Senate Committee on Homeland Security and Governmental Affairs on behalf of the Juvenile Diabetes Research Foundation two years ago, Rep. Mike Castle (R-Del), co-chairman of the Congressional Diabetes Caucus, announced he was “committed to supporting legislative activities.” When the hearing was over, Jonas was ambushed by a gaggle of teenage girls wanting pictures and autographs.

Lady Gaga is not new to gay issues and Morris believes that is what gives her power in the gay community. “When Lady Gaga gets involved she brings in a younger generation,” Morris says. “She doesn’t just get people talking, she gets them listening.”

Will celebrities become the real catalyst for political change? Still hard to tell, but it’s clear any time a celebrity goes to Capitol Hill someone is going to report on it.