New Works at 5 Pointz, Despite an Uncertain Future 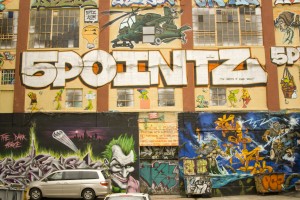 5 Pointz, the iconic Long Island City outdoor graffiti art gallery, will open for a new season of exhibitions in May. But back in March, owner Jerry Wolkoff announced plans to raze the 200,000 square foot factory building whose exterior displays hundreds of works of graffiti art to build apartments and a shopping mall–probably as soon as next year. The news not only makes resident artists worry about not having a legal space to paint in the future, but also provides them an additional sense of artistic inspiration.

“This season will have to be dope,” said 5 Pointz curator and artist Meres One (his artistic name) just after completing a roof-level Mets mural, which passengers on the 7 train can see on their way to Citi Field for home games. After all, he said, if the building comes down, he wants it to happen with a bang.

Beyond that, Meres One declined to make any more comments. He said he started negotiations with Wolkoff to preserve the building, which remain ongoing, and doesn’t want to create bad blood between the two.

But Zeso, a resident street artist from Lyon, France, said he felt angry. Not only because the painted walls could soon crumble, he said, but also because not enough members of the hip-hop community have come out to support 5 Pointz’s preservation. Since street art is considered part of the hip-hop movement, Zeso thinks there should be greater solidarity and voices to keep 5 Points standing.

“The guys like Jay-Z, Fat Joe, Marc Ecko, they make big business with graffiti, and this place gonna shut down, and these people don’t give nothing back,” he said. “They just take money from hip-hop, and they don’t give anything back. For me, that is shameful. What they gonna do? Nothing. We give them the money…and when it comes time to give something back, nothing…they just take it. If they tear this place down, I’m not gonna be surprised.” 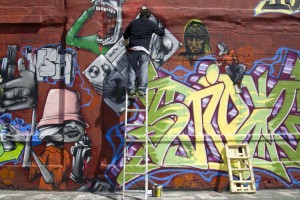 Zeso spent almost a week finishing his mural, which shows the New York City skyline and hip-hop characters. Located on the back end of 5 Pointz, it will be on display this spring.

Eventually, Zeso got back to work. His wall-length mural–part of which shows the New York City skyline–represents the city that’s inspired him most as an artist. But if 5 Points comes down, he said, he’ll continue his graffiti work.