Vancouver based indie-rock band, Destroyer, is on tour again after the release of its 2011 album Kaputt. I went to see their New York City show at Manhattan’s Webster Hall. The performance was astonishing. 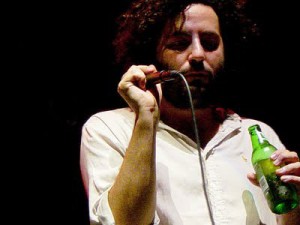 Dan Bejar, Destroyer’s singer-songwriter, seemed to decay in front of us. For most of the concert, he stood with his back to the audience or sat down at the front of the stage where no one could see him. He relied on lyric sheets in order to perform several songs and he drank from the beer bottles stationed next to him as if he were hydrating with water.  It sounds like an absolute mess, I know. But the music was amazing and for some reason, the performance really worked.

Rich (23), stood near me and spent the concert nearly weeping with joy. He described Bejar’s image as a sort of anti-performance. “It wasn’t melodramatic. It wasn’t sentimental. It was just numb,” he said.

Bejar’s presence contrasted with that of other indie groups like The Flaming Lips. Wayne Coyne, the lead singer of The Flaming Lips, creates a sense of intimacy by projecting his face onto a giant screen behind him. 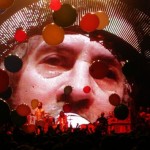 But Bejar created intimacy by hiding, instead of by exposing himself.

“It’s odd how someone so shy can completely command the stage,” said Raymond  Chalmé (18).

I went home and mulled over the riddle. In theory, the concert should have been a complete failure, but it was gorgeous! Why did it work so well?

I think it is because he was this broken thing up on stage and we were these broken people down below. Colored lights made a halo out of his illuminated curls and he was this patron saint of imperfection. Out of the destruction he created this beautiful sound and he was at once this train wreck of a person and this incredible success.The paradox of the situation saturated each person and we were all destroyed–and resurrected–together.

This says something powerful about the way this generation experiences music (everyone there seemed to be in their twenties or early thirties). There’s a musical culture of introversion and subsequent human identification that Bejar tapped into really well and his audience responded with joy.

This entry was posted in Culture, Music. Bookmark the permalink.