I heard a soft roar as I stepped onto the three story escalator. By the time my feet hit the crescent of the escalator, the soft roar had turned into an all out ear piercing noise of chatter and clanging dishes, usual fare for one of New York’s biggest and busiest Chinese Dim Sum restaurants. “It is always like this on the weekends, but their table turnover is quite quick.” said Angie Yee, a long time dim sum lover and regular at the restaurant.

Visiting the five thousand square foot establishment on Elizabeth Street in Chinatown, Jing Fong, is like being transported to the center of Kowloon City, Hong Kong, on a Sunday afternoon, where most tea houses serve the dumpling style steamed and fried delicacies as a popular weekend brunch option.

Dim Sum is not just small appetizer size food that is served in small bamboo  baskets on carts that are pushed by servers around the room, it is a cultural institution for most Chinese. Patrons at at Jing Fong experience the culture of community eating and drinking tea, in an open banquet hall type establishment. Yellow uniformed clad waitresses, whose English dictionary primarily includes “you want chicken or shrimp,” shuffle around tables of hungry customers, from all ethnicity, who simply raise their hand to ask for their next dish. One quick mark on the bill, that sits on the table through out the meal, and you are served a dish. 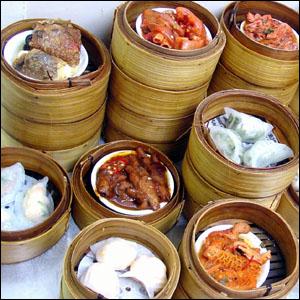 The red and gold, dragon walled clad, restaurant seats almost 300 people and talking at a whisper is just not an option. Cantonese, Mandarin, Spanish, English, and at our table Hindi, could be heard buzzing around. There is a head maitre d’ who oversees about 4 tables at a time. She or he works as a translator and a quality control inspector, ensuring waitresses know what dim sum specialty the customer has ordered and making sure the appropriate charge has been added to the bill.

Our maitre d’, Lucy Ping was completely enamored by my five year old’s love of the pork, shrimp and fish dim sum. “Most children don’t like our food, they think it is smelly,”she said. “Your daughter is good she likes different things.” 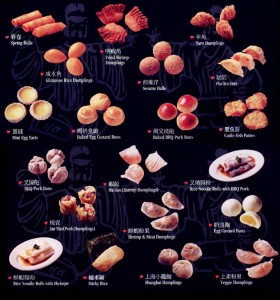