For over a year, the space was boarded up. It was vacant, save for a faded sign that advertised Korean Well-Being Cuisine.

That false promise of nutrients, on the corner of 42nd Street and Queens Boulevard, was answered by Salt & Fat, a restaurant that recently filled the space with the promise of bacon-laced “crack ‘n’ cheese.”

S&F’s chef, Daniel Yi, learned his skills alongside Patricia Yeo at Monkey Bar. He wanted to bring his cuisine away from Manhattan, to his own hood: Sunnyside, Queens. 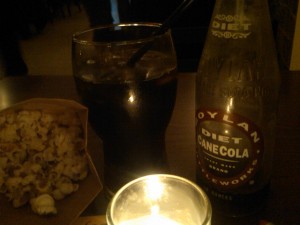 Two weeks after the March 25th grand opening, there was a 20 minute wait for a table. Salt & Fat lacks both a liquor license and a single vegetarian menu option. But servers bring each table popcorn cooked in bacon oil, compliments of the chef, which sort of makes up for its shortcomings.

Like Pies n’ Thighs in Williamsburg, Salt & Fat takes its name seriously and literally. There are few items on the menu without some form of animal fat and a hearty dose of sodium. But unlike Pies and Thighs, which focuses its cuisine on Southern comfort food, Salt & Fat has very scattered offerings, from sashimi to oxtail to the popular, aforementioned crack ‘n’ cheese, deep-fried potato gnocchi with bacon and béchamel. 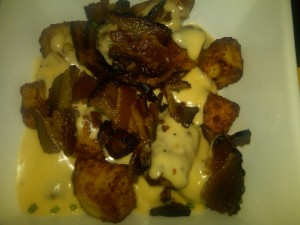 Kari Bently-Quinn, a 30-year-old playwright who came from Astoria to give the place a shot, said the crack n cheese was worth the commute. “How did they get the gnocchi so light?” she wondered. Among the other small plates she shared with her husband were mussels with churizo and yellowtail cured in kombu with speck and pickled jalapenos. 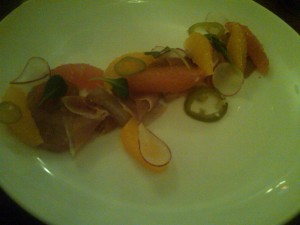 The serves advise diners to take a small bite of everything on the yellowtail plate at once – the fish itself, the grapefruit, the oranges, the slices of jalapeno – and then wrap it up in the speck.

The mixture of Italian-style sashimi and deep-fried gnocchi did not fare well for Bently-Quinn’s stomach. “I am beginning to tire of the thumb our nose at health trend in the city,” she said. “I always appreciate some healthier options and there were…well there were none, really. I also felt sick by the time I was done eating.”

She enjoyed the popcorn, but said that its time that New York leaves its bacon craze behind. “It’s very easy to make something good with bacon and it’s getting sort of overdone,” she said.

The biggest drawback, for Bentley-Quinn was the lack of the booze that would easily compliment the crack n’ cheese. “It was not even BYOB. We brought this bottle of wine and they wouldn’t let us open it.”

Despite the sobriety and stomachache though, she was happy with the quality of food. “It’s a good addition to the borough,” she said. 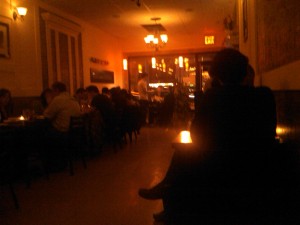