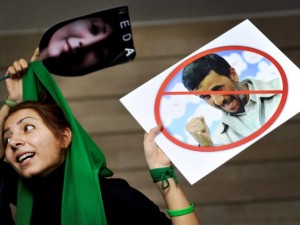 Being a filmmaker in Iran is not easy. Sure there is beautiful scenery, exciting tales of real life struggles and the aftermath of a revolution and war to inspire, but all these visions may never get seen due to the strict and changeable censorship rules imposed by the ruling regime.  The battle for expression is not new in Iran and is now becoming a subject of many filmmaker’s works.

But I first became interested in Iranian cinema through a profile of Iranian filmmaker Abbas Kiarostami. End Games featured in the March 14 issue of the New Yorker, unlike many other articles on film censorship dives into the themes and subjects of Kiarostami’s films to examine censorship from within the director’s art

“It may be that only a filmmaker with this kind of history would have imagined that a perambulatory couple could serve as the basis for radical work.”

Through David Denby March’s thorough examination he finds that censorship is not always a restricting factor for Kiarostami, who admits that it has forced him to become inventive.

Dan de Luce, of the Guardian, also looks at the affects of censorship when he questions Can Iran’s filmmakers survive the film censors?.  Written in 2004, before the unrest and tighter restrictions imposed on directors post-2009 election, this is a comprehensive look at the history of Iranian censorship.  De Luce also looks outside the major impact zone. Considering the affect of censorship on film critics and how censorship has proliferated child protagonist film roles.

“These ideological restrictions may explain why some of the greatest Iranian films focus on children’s lives or portray life outside on the street rather than inside the home.”

Delving again into the once-celluloid pools of a film makers world, Louis Godfrey, writing for Sound on Sight, tells Jafar Panahi’s story.  A story that has frequented culture pages and film festival blogs since his arrest and ban from film making was imposed by the Iranian regime last year.  Keep the Lighthouse in Sight, bookends Panahi’s struggle with the symbol of a lighthouse featured in a recently released video made in protest to Panahi’s arrest.

Godfrey intersperses his discussion with video clips that allow us to see the results of censorship and the filmmakers creativity and style.  Godfrey also relates Panahi’s struggle to other censored artists around the world.

“Through cinema, he confronts the basic modes of societal organization in Iran, refusing to accept them as a natural ordering, and exposing them as an arbitrary relationship designed by the state to exercise power over the citizenry.  For the audience, every frame is a call for relentless questioning, a challenge to imagine a fundamental restructuring of their world based on common human bonds.”

Mehrdad Oskouei questions the Iranian regime’s grip on his work as a documentary maker every time he collects an image.  Which he does regularly on his quest,

“to reconstruct Iran’s visual history, filling a vacuum left by a government that lives in constant denial of its pre-revolutionary past.”

The New York Times’ William Yong, tracks Oskouei’s plight with censors but also manages to explore the subject of his work, a film about the rise of nose-jobs in Iran due to the competition for eligible men after the 1980 war with Iraq.  As Oskouei reconstructs Iran’s visual history it seems the country and its image is being recreated too.